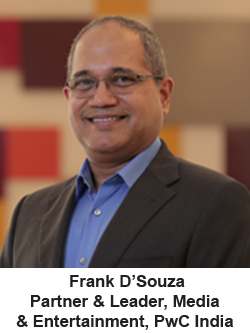 Frank D’Souza, Partner & Leader, Media & Entertainment, PwC India would be addressing this year’s Outdoor Advertising Convention (OAC) which will be held at Renaissance Mumbai Convention Centre Hotel, Powai, Mumbai during July 28-29. In his presentation, which will be made in the Foundation Session of the Convention on July 28, Frank would be speaking on the evolving media consumption patterns in India and how that impacts the OOH business.

Frank qualified as a Chartered Accountant in India and has over 25 years of experience. He set up and headed the equivalent of the Entertainment & Media (E&M) Practice within Arthur Andersen in 2000, for tax/regulatory offerings, and continued in that role in EY and BMR.

In the Indian context, being a highly regulated sector, and by its very nature involving cross-border operations, though the regulatory and tax landscape evolved over the past couple of decades, the contours of the licensing regime and the inability of the tax regulations to consider E&M business models, meant that the need for advisory and litigation support services was significant. As a result, Frank had the opportunity to work with several E&M majors on aspects related to foreign investment structuring and processing regulatory approval, structuring of cross border operations, litigation and dispute resolution support, as an expert for arbitration proceedings and transfer pricing.

Frank has also been in advising clients engaged in OTT offerings specifically in context of India centric offerings. He regularly participates in and addresses several seminars relating to regulatory developments in the Indian media industry.