Aptly titled'Crazy Chairs' the creative brings out a unique and humorous take on the current election scenario. 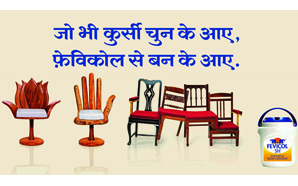 Fevicol, one of the largest selling brands of adhesives in India, has rolled out a new integrated brand campaign including outdoors, TV and digital reflecting upon current prevailing election environment in the country. Continuing its strategy to develop communication based on situations, the new concept rides on the ongoing election bandwagon subtly weaving in the brand message in the script. The communication piece, which is more than just functional, and is in line with the brand proposition of strong bonding.has been developed by O&M.

Anil Jayaraj, Chief Marketing Officer, Pidilite Industries shares, "Most of our advertising bases the core brand proposition of "strong bondsâ€ in an extremely creative and yet simple way. Our previous TVCs on Fevicol have aimed at exploring situations where this proposition can be communicated in a memorable and consistent way. In this campaign, we have experimented with the elections. We believe this new communication takes our brand ahead, and stands out.â€ 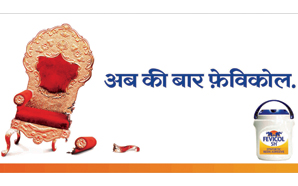 In addition with the 360 degree media promotion Pidilite is also executing a number of demand generation initiatives for Fevicol to support this campaign.

Piyush Pandey Executive Chairperson and Creative director, Ogilvy & Mather- South Asia shares on this concept, "Keeping in mind the tone and manner that Fevicol has had for the last 21 years, Fevicol Crazy Chairs TVC captures the atmosphere created by the general assembly elections in the country. It borrows the excitement and interest of a common man and thereby creating a sync with the audience.â€