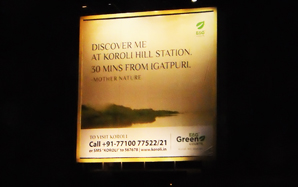 Keeping this in mind, Global Advertisers has come up with a 15-day teaser campaign in the first phase which generated intense curiosity through larger-than-life billboards that carried messages like: "Happy with your 5000 watts surround sound? Hear Me,Thunder.â€

The campaign made a presence at prominent areas across Mumbai like Marine drive, Bandra, Andheri, Juhu, Mumbai Pune Express highway, Nasik Highway. To execute the campaign on a grand scale the agency has launched it in two phases. The first phase began with a teaser campaign which generated intense curiosity through larger-than-life billboards that carried green messages. For the second phase, Global Advertisers deployed giant size billboards across Mumbai which gave a delightful project view of Koroli Park. It is a one-year campaign with sites all over Mumbai on a rotational basis.

Commenting on project, Sanjeev Gupta, MD, Global Advertisers said, "We are happy to be associated with E&G Global Estates Ltd. Our team has given 360 degree brand visibility to Green court in Mumbai. The outdoor campaign has been planned to seek attention of target audience; the campaign has created awareness about the project as well as its brand identity.â€