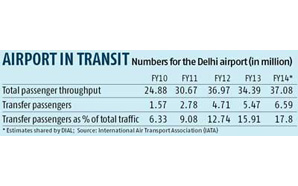 The Delhi airport, with the share of its transit passengers in total annual traffic nearly doubling in three years to about 18 per cent, appears to be transforming itself into an international hub.


Delhi International Airport Ltd (DIAL) has estimated the number of transit passengers for the airport to hit 6.59 million by the end of March, 17.77 per cent of its projected 37.08 million annual traffic.

Buoyed by Air India's Star Alliance induction, expected to add scale to the airline's global flight plans, DIAL expects transit passengers' share in total to increase to 25-26 per cent by 2015-16. That would put Delhi in the league of global airport hubs like Chicago and Hong Kong (where transit passengers account for 26 per cent of total) and Bangkok (around 40 per cent). Airports like Singapore and Dubai, which hardly have any domestic business, have more than 50 per cent of their business coming from transit passengers.

DIAL, the GMR Infra-led consortium that operates the Delhi airport, also expects full-service carriers like Tata-Singapore Airlines to start long-haul flights using Delhi as a hub, especially with the government planning to remove the restrictions â€” such as five years of operational experience and a fleet of at least 20 aircraft â€” on domestic carriers flying abroad.

"The number of transit passengers at Delhi's T3 (Terminal 3) has gone up substantially in the past three years. With Air India moving into Star Alliance, we expect a lot of partner airlines to make India the hub. We expect transit traffic to account for 25-26 per cent of passengers by 2015-16,â€ said Kiran Jain, head of airline marketing and route development at DIAL.

"The share of transit passengers in the total traffic is around 19.6 per cent. Most of these passengers come from neighbouring countries like Nepal, Bangladesh and Sri Lanka. But, with Air India starting direct flights to Birmingham, Sydney and Melbourne, we see passengers from Europe transiting in Delhi before travelling to Australia. At least 12 per cent of the passengers on Air India-Birmingham flights will transit at Delhi to go to Australia every day. Also, many will come from Birmingham and transit to domestic destinations and neighbouring countries. The total transit passengers on this route is 75 per cent,â€ said Pradeep Panicker, chief commercial officer (aero), DIAL.

Air India accounts for a little over 41 per cent of transit passengers at the Delhi airport. The state-run carrier, which feeds traffic at the airport from Indian cities and regional international destinations going to Europe, US and Australia, is followed by Jet Airways and IndiGo. Also, China Airlines flies from Taipei to Rome, transiting from Delhi and Ethiopian Airlines flies from Adis Ababa to Beijing via Delhi.

According to Centre for Asia Pacific Aviation (Capa), about 40 per cent of international traffic out of India travels to its final destination through an intermediate offshore airport. As much as half of such traffic is captured by hubs in West Asia. With Tata-SIA starting domestic operations, the Delhi airport is likely to get a boost in realising its potential.

"Delhi airport's position as a global hub will get a boost with both Air India and Tata-SIA using it as a hub for long-haul flights," said Amber Dubey, partner & head (aerospace and defence), KPMG.