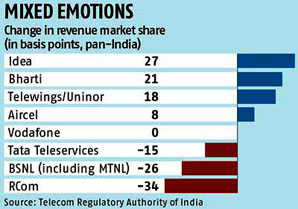 Idea Cellular, the country's third largest telecom operator, gained the highest in revenue share among companies in the September-December 2013 quarter. They were followed by Bharti Airtel and then Telewings Communications, which operates as Uninor in only six of the 22 telecom circles. Vodafone was able to sustain its revenue market share during the quarter.


Idea's revenue share, according to recent data published by the Telecom Regulatory Authority of India, rose 27 basis points (bps) from the previous quarter and Bharti gained 21 bps; overall revenue of the sector increased 3.4 per cent. Telewings is the only company to gain revenue share in all its operating circles, with a total increase of 18 bps.

RCom lost revenue share in all 22 circles; its share dropped 34 bps on a pan-India basis. Tata Teleservices lost revenue share by 15 bps, being able to raise share only in the Mumbai circle. Aircel's increased by eight bps. BSNL's (including MTNL) was down 26 bps.

"The recent spectrum auction limits the ability of incumbent telcos to continue with tariff wars among themselves. With lot more spectrum coming for auction, we voice realisations to improve,â€ Rajiv Sharma, analyst with HSBC Global Research said in a report.