The activation campaign, spread over 21 days, covered six Mumbai Lok Sabha constituencies where the AAP has contested, extending into the most interior parts of the city 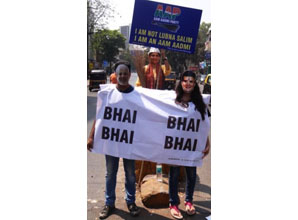 In the midst of soaring political temperatures, Brand Connect Media executed a novel activation campaign in the form of a street play for the Aam Admi Party in Mumbai. The street play, known popularly as'nukkad natak', depicted the various malpractices seen in the public space, from red tapism to outright corruption. The campaign, spread over 21 days, covered six Mumbai Lok Sabha constituencies where the AAP has contested, extending into the most interior parts of the city.

Brand Connect Media executed the campaign activity under strict Election Commission mandates that entailed obtaining the Commission's approval for the script itself, as well as permissions from BMC/Traffic Control. The campaign culminated with an AAP press conference in Juhu, which saw the presence of many acclaimed film, TV and theatre artists who lent their voice and support to the party.

Commenting on the campaign, AAP leader and candidate Mayank Gandhi said, "It is good to have people who come out on the streets in support of the right cause. I thank the Brand Connect team which executed an exceptionally well written script into a beautiful'nukkad natak' that showcased the realities of a common man and their plight in the country.â€ 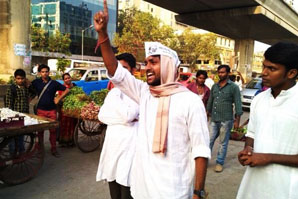 Vijay Cavale, Director, Brand Connect Media, said, "This particular activation was a passion play and straight from the heart of concerned citizens of India. It was also probably the most challenging one that BCM has executed till date. This would perhaps be the first time that an OOH agency has been this deeply involved in a political campaign. Brand Connect merged seamlessly with the AAP and delivered a street play which included writing a script and getting it approved by the election commission. The street play rehearsals were held at Prithvi Theatre and the actors were trained by acclaimed actress and AAP supporter Archana Puran Singh.â€


Two troupes each did five street plays /evening across key constituencies in Mumbai for a 21-day period. "Since these were hard hitting scripts, each troupe as per the election commission mandate was accompanied by an Election Commission appointed videographer and a police team on motorbikes and in vans supported by the police control room,â€ he explained.
Tags : Brand Connect Media Aam Admi Party Mumbai Vijay Cavale Archana Puran Singh
Advertisement