The 3-D innovation campaign has been initiated across strategic locations in Kolkata as part of the entertainment channel's promotion of its new fiction show. 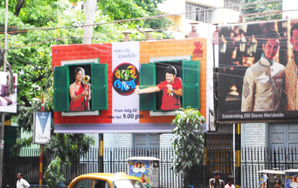 The interesting creative used for the promotion of the show on OOH revolves around a story where two families residing in neighbouring houses are always bickering with each other. The aim of this outdoor campaign was to bring the central characters of the primetime mega soap into the limelight by using 3D effect. Thus, two creative layouts have been used for the campaign. For one, a simple 2-D back Lit hoarding was converted into 3-D hoarding using back lit acrylic and cut-outs. Further, for the second creative, double-decker sites were used.

Sujay Kutty - Executive Vice President & Business Head, Zee Bangla, shares the thought process behind the ideas, "Our aim was to keep the line of communication simple. In order to make it impactful, we wanted to accentuate certain elements that form significant components of the programme through 3-D cutouts in the hoardings. The USP of this campaign lies in its innovative approach towards using outdoor media by drawing attention towards the protagonists and the dynamics they share. Outdoor media provided broad coverage and helped to create the buzz in the market about the launch which was our primary requirement. The special creative gave the desired impact.â€ 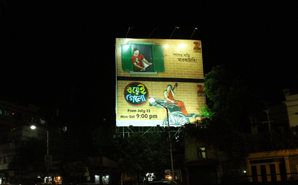 Executed by Percept OOH, the 3-D innovation has been done across prime and strategic locations in Kolkata involving sixteen sites. Some of the prominent transit locations include Park Circus crossing, near Nizam Palace at Camac Street, Rabindrasadan, Ballygunge Phari, Gariahat, Russel Street, Kasba, Moulali Crossing, Prince Anwar Shah Connector, near Topsia Police Station and such. As the campaign has been done during the monsoon season, there were lot of challenges involved in implementing the idea. For one, the 3-D hoardings needed to endure rough weather.  The materials used and the hoarding design ensured that the entire structure was lightweight as well as sustainable. This was done considering that the entire communication of the programme had to ensure maximum eyeballs for a period of 15 days.

Debasish Dey, Regional Manager - East, Percept Out Of Home, shares, "The idea was to skip typical vanilla OOH format and do some innovations. To put the idea in the success track naturally whole, the focus was to develop a well-thought innovative campaign that stands out and creates top of the mind recall. As the plan was to highlight the characters, the images were raised to 4 inches which needed crafted labour and this was the most time consuming part of the entire process.â€ 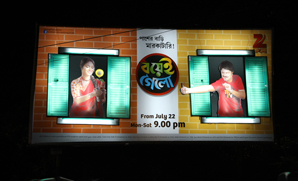 The other challenge was to place the right hand overlapping the window panel which was also raised by 4 inches with the backlit box, thus the total jutting came to 8 inches. A single frame carried the entire unit, fitted on the backlit flex from outside. This was a complicated innovation where the execution was especially challenging. But the most challenging part was to complete the production and execution on time, to leverage maximum benefit from every site.

"It is always very challenging to create any innovation in any backlit hoarding in comparison to front-lit. The aim was to get the real life effect of the cut-out figures. The fundamentals of retail have been implemented here in the outdoor medium by the use of acrylic back lit, and SAV pasted on acrylic. The cutting, erasing and moulding have been done just like signage on the hoarding. The slimmest CFL lamp, which has been used to make the flower glow and seen in the hands of the female protagonist, was also a challenge,â€ explains Bikram Banerjee, Director- Jellybeans Media Pvt. Ltd., the media owner who implemented the hoarding innovation under the aegis of Percept OOH.

The campaign has received overwhelming response. "We received positive feedback from viewers and industry. Such a concept in outdoor hoarding is new and we feel we have definitely succeeded in our endeavour,â€ signs off Sujay Kutty.