The new campaign uses live on-ground activity, to reinforce the brand"Dadagiriâ€ in the mind of their target viewers.

Zee Bangla, the popular 24x7 Bengali entertainment channel, has launched yet another innovative ground activity to increase the TRP ratings of their premium show'Dadagiri' Unlimited Season 4, which is a new quiz show hosted by cricket star Sourav Ganguly. For the'Dadagiri' launch campaign, Zee Bangla has adopted a manifold approach experimenting with newer ways of connecting with the viewers through digital, on-ground and OOH activities.

To engage the target audience, the channel has for the first time came up with an on- ground'Dadagiri show' for the mass, live with Sourav Ganguly at South City Mall, Kolkata.

Sujay Kutty, Executive Vice President & Business Head, Zee Bangla, says, "Dadagiri has always been a premium product for us. With Sourav Ganguly as the face of Dadagiri Unlimited 4, we knew that we were offering a great proposition to our viewers.  Our aim was to maintain its premium aspect yet make its presence impactful.  Hence, we used different platforms of promotions like OOH, ground activities like Video conferencing and "Live Dadagiri with Dadaâ€ activity and also Dadagiri game mobile app.â€ The channel also used traditional 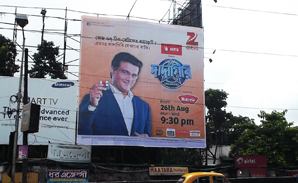 large sized bill-boards, mall branding and such by taking 21 sites in some of the major locations of Kolkata like Kasba, Ultadanga, E.M Bypass, Gariahat, Park Circus No.4 Bridge, Bijon Setu, Sealdah etc.  The OOH campaign has also been rolled out in 45 sites in ROWB which include major locations in B Towns like Howrah, Asansol, Durgapur, Midnapur, Haldia and such.

While speaking on the execution work, Sujay Kutty shares, "The creative inputs were executed by our creative agency, Response India Pvt. Ltd. and the OOH activity was implemented by OAP. The on-ground activities were executed by Storm Communications Pvt. Ltd.â€
Speaking about the ground activity which was conceptualized with the aim to bring Sourav Ganguly closer to his numerous admirers through the Dadagiri platform, Sujay further says, "We were looking for a venue which has high footfall and has a good mix of crowd coming, with people of different age groups and from different walks of life. This would provide an opportunity for'Dada' to meet with fans and interact with them. Hence, South City Mall provided us with the right platform to implement this activity.â€ 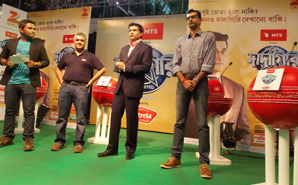 For Zee Bangla, the major challenge was to connect with the huge audience on a one-to-one basis and ensure that the brand "Dadagiriâ€ is reinforced in the mind of the viewers. "We have received an overwhelming response from our audience. The ground activity at South City mall was a success as numerous fans thronged the mall and it shows how it has influenced a huge target group to be present at the South City to meet'Dada'. We strongly believe that we have succeeded in our endeavours,â€ signs off Sujay Kutty.
Tags : Zee Bangla Dadagiri Sujay Kutty
Advertisement