Tata Starbucks launches tactical campaign for its drive- thru outlet 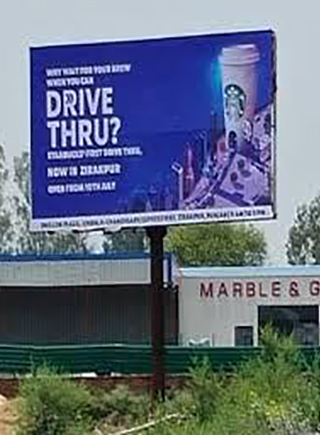 As part of its foray into the drive-thru space, global coffeehouse brand Tata Starbucks along with digital agency WATConsult, from the house of Dentsu Aegis Network, has launched a 360-degree campaign titled, ‘Why wait for your brew, when you can Drive-Thru.’ The brand inaugurated its first drive-thru outlet in India at Ambala Chandigarh Expressway last month.

The idea is to familiarize the people of Chandigarh to the addition of a Starbucks drive-thru store, quirky hoardings have been strategically placed in the city’s most prime locations. The campaign is further supported by offering a sneak peek to consumers through the brand’s digital platforms.

According to Deepa Krishnan, head of marketing, Digital, Loyalty and PR, Tata Starbucks, the new campaign ‘Why wait for your brew, when you can drive-thru’ is aimed to establish the drive-thru as an agile and safe solution in the present times. “The interesting illustration of the Starbucks Cup has helped us engage with our customers and position our drive-thru message in a creative and unique way,” she added.

As Tata Starbucks forays into the ‘drive-thru’ restaurant space, we have created a full-fledged 360-degree solution for the brand, Heeru Dingra, CEO, WATConsult said. “The campaign has been tactfully conceptualised and spans across various advertising channels including digital, Out of Home (OOH) and print. To connect well with its consumers in Chandigarh, we seamlessly synchronised and brought together the salient features of the brand with the drive-thru launch and Chandigarh as a city,” she elaborated further.