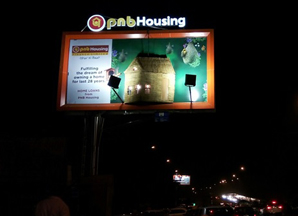 PNB Housing has once again taken a highly innovative route on the OOH landscape to connect with prospective home buyers across the country. The brand’s OOH campaign, launched in September, was part of a large campaign that ran simultaneously on different media that included television, print, and digital.

The theme of the campaign centred on using imageries of animals to draw inspiration from their physical traits. For instance, the leopard symbolised speed that characterised PNB Housing’s rapid business growth (being among the leading housing finance companies in India as of March 31, 2015, as per the IMaCs Report). The elephant represented the growth of the company (PNB Housing was ranked as 5th largest HFC by loan portfolio as of September 30, 2015, as per the IMaCs Report).

A large flock of colourful flamingos signified the company’s ability to maintain growth of the bank’s loan portfolio without compromising the credit quality, whereas the depiction of a mother deer and her fawn symbolised the bank’s caring approach to their customers. The OOH campaign was rolled out in cities like Delhi, Mumbai, Bengaluru and Ahmedabad. 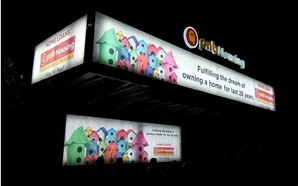 About the campaign, Shaji Varghese, Business Head and GM, PNB Housing Finance Limited, said: “We understand that buying a home is a very emotional decision and we at PNB Housing do our best to offer exclusive experience and services to our customers. In line with that, our present campaign has been designed to highlight our key corporate messages, talking about the company’s strengths and strategies. The theme revolves around animals who inspire us by their physical traits. The campaign creatively uses them to turn the manifestations of nature into PNB Housing’s story -- fast growth, market strength, customer centricity and reliability. This campaign is our effort to remain connected with the consumers, establishing PNB Housing as a new generation housing loan provider.”

DDB Mudramax has executed the campaign while MASH Advertizing (a Percept Hakuhodo company) was the creative head behind the campaign. Tarun Nigam, Executive VP, DDB MudraMax, the media and outdoor agency for the campaign, said, “We are glad be a part of the execution and implementation of the second phase of the PNB housing finance campaign. The campaign is being implemented on different OOH platforms. A key milestone of this campaign is that across media “impact” is the operating word -- all the executions are layered with impactful innovations. We used the visual pneumonic of the “nest" in the first leg of the campaign. And now in this phase “homes” is the key peg. We have created "actual home replicas" on the hoardings, at airports and mall environments. We have specifically dominated the Bombay Stock Exchange locality.”