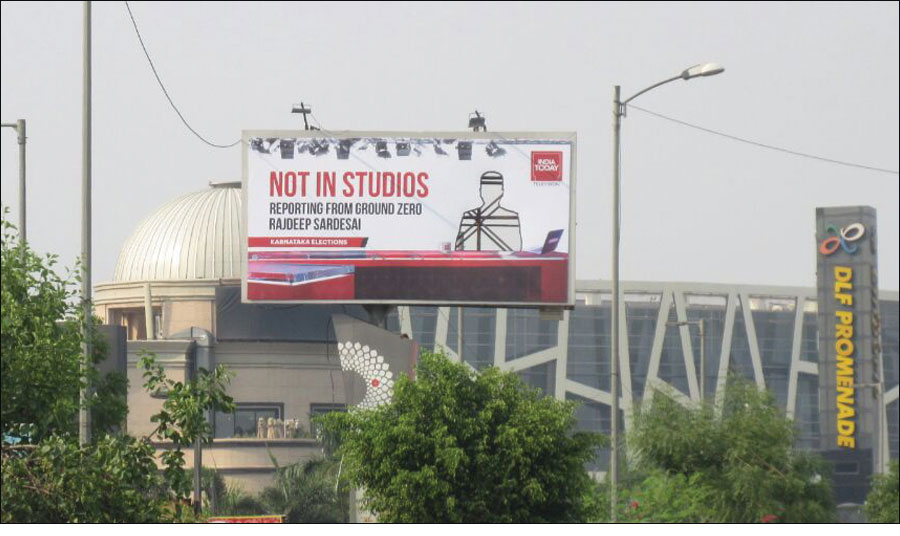 India Today, a leading new channel, altered its reporting practice for the recently-concluded Karnataka Elections by leaving the newsroom comfort to reach out the ground zero for live reporting by their two eminent reporters, Rajdeep Sardesai and Rahul Kanwal. And to up their game, the brand has taken the OOH medium into its repertoire to make the point that their channel doesn’t believe in newsroom comfort and goes straight to the heart of the action to capture the entire political happenings in Karnataka. The channel believes that the elections are fought on the ground. The campaign running in Bangalore and Delhi has been handled by Hindustan Publicity.

The campaign, simple yet effective, creatively demonstrates the reportage strategy by interestingly showcasing the newsroom where the anchor is missing. This is depicted on the flex with a cut-out in human shape. Also, the copy boldly states, ‘Not in Studios, Reporting from Ground Zero’.

Showing their trust in the OOH medium, the brand spokesperson, says that being a mass medium, OOH has always been a crucial communication channel and ultimately becomes an obvious platform to generate the credibility in the minds of the masses. This is the first leg of the OOH campaign; the campaign will be further carried forward with the change in the creative, depicting the exit polls and other election-related communication.