In sync with the God-fearing Indian mindset, McCann Erickson designed an activity to address drunken driving by giving a pinch of reality to the visitors of Zara bar in Chennai. 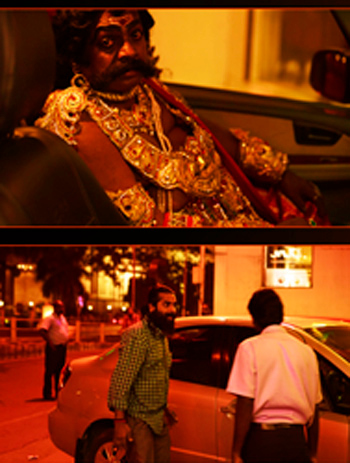 Plenty of advices, statuary warning and advertisements have been created on the ills of drunken driving, but none of them really worked out, as even today 70% of road accidents in India occur due to drink and drive practice.
McCann Erickson in association with Zara Bar and Chennai Traffic Police practiced to halt the evil habit with an unpleasant touch of reality that too with a solution. The agency brought Yama, the god of death itself to talk about the issue. An activity was rolled in Chennai's famous Zara Bar for two days which saw some dreadful yet positive results.
Yamaraj, the lord of death, is believed to arrive during death and take over the soul when you die. Therefore this time, Yama was called on earth to raise the awareness on the dangers of drunken driving. The live stunt activity starts when the patrons to Zara bar gets greet with an unusual sight when the valet brought their car back from the parking. The car had an unexpected guest in it i.e. Yamaraj ready to take them in case they are planning to drink and drive. At the end the valet guy hands over a brochure to the guest that showcases'Your Time Hasn't Come- Drink and Get Driven'. That is how, agency wanted to give people a wake-up call with this activation /experiential idea with a spin at the end of it - Drink and Get Driven.

Anil Thomas, Regional Creative Director, McCann Worldgroup, Bangalore explains, "People have a blind spot for Anti-Drink and Drive messaging, despite knowing the dangers of drunken driving. The only way we could get them to sit up and take notice was by doing something disruptive. So we decided to organize a live stunt. We're thankful to Zara and Chennai Traffic Police for approving our idea and partnering us in its execution. We never imagined the activity would become such a sensation.â€
Countless anti-drink and drive messages have been made till but almost all of them go unheeded, sharing the reason and solution of this Anil says, "The key difference in our idea was the'Drink and Get Driven' message that actually gave a solution to the drinking and driving problem.
The overwhelming response that the activity has received, both on-ground and online, is testimony to the fact that this is the way to goâ€.
Narendra Malhotra, CEO, Oriental Cuisines says, "When McCann approached us with their Yamaraj idea, we were more than happy to partner them in this endeavour. We're also extremely thankful to Chennai Traffic Police for supporting this initiative, and for further promoting it through their social media pages.â€
Click here to watch the video
Tags : VJM-CAM-YAMARAJ 298px
Advertisement