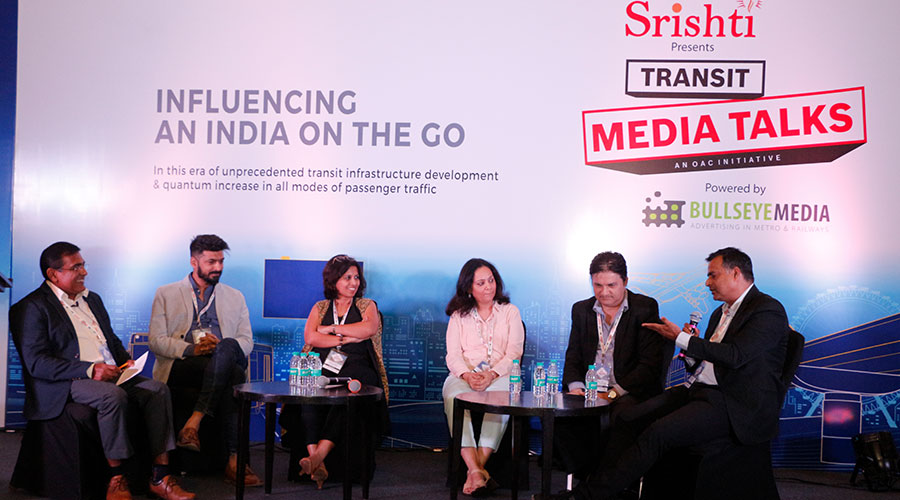 It is often cited in the OOH industry circles that transit media seldom figures in the brand campaign plans. Responding to a question centred on this matter, during the course of a panel discussion on the theme of ‘How transit media can be a key part of OOH plans’ at the 1st Transit Media Talks Conference held in Mumbai on February 28, Rachana Lokhande, Co-CEO, Kinetic India asserted that the use of transit media is predicated to a brand’s communication objective and “basis that the choice of medium is arrived at”. Today, as transit media metamorphoses, as is evident in the case of airport, Metro and railway media, a greater number of brands are likely to consider transit media for advertising, she said.

Vinkoo Chakraborty, Business Head, Rapport India stated emphatically that transit media is a key part of the media mix for various brand campaigns. As the transit media industry trains greater attention on aspects like media hygiene, transparency and good presentation, this medium will attract greater attention of advertisers, said Vinkoo, adding that “we have running some campaigns only on transit. We have done campaigns exclusively on autorickshaws pan-India”.

Fabian Cowan, President, Posterscope India pointed out that “traffic” is a part of day-to-day conversations of people which highlights the fact that most people are spending a substantial lot of their time in transit.  “If brands can use data-points on this people in transit more effectively, more and more brands will start demanding that transit media must be part of their campaign plans,” he explained. Fabian added that romanticising this medium can bring about the big change the outlook on transit media. “Sooner than later this will be the norm,” he said.

Jayesh Yagnik, COO, MOMS Outdoor Media Solutions stated that the bigger challenge for the OOH industry had been to get a larger share of the ad pie than it commands as of today, so the emphasis has not been so much on attracting spends particularly on transit media. However, when it comes to hyper-local targeting, for instance, transit media could be the go-to option for the advertisers. As the transit media inventory grows, there will greater intent on the part of advertisers to use the medium to connect with their respective target audiences.

Transit media is now being more creatively used, said Dipankar Sanyal, CEO, Platinum Media. He cited how Tata Hexa campaign was writ large on transit media formats that included Metro train wraps, video of the car pulling a plane to demonstrate its power, etc. “It’s not just about being on transit media. A lot depends on how creatively you use the medium,” he said.

While media hygiene factors and monitoring systems are important, Vinkoo said that monitoring a media that is on the go could be quite challenging. There are issues around auditing and compliances that largely remain unaddressed. The other big issue is lack of consistency of the visual appeal and aesthetics in the formats, she said, adding that “if you take pictures of 10 bus panels, they will all look different”. Creative agencies would find it rather difficult to plan for such varied formats that also do not ensure any consistency in their presentation to the consumers.

Rachana reiterated the issue of transit media monitoring. For instance, if a cab service has taken double booking of advertisements, there is hardly a way to monitor that and take suitable action.

Reflecting on the media hygiene issues, Jayesh said that while the top players have ensured good consistency and quality of media, that may not be case with the media owned by the smaller players in the smaller markets, which is an issue when it comes to executing pan-campaigns on transit media. So, in a way, fragmented ownership of transit media comes up as an issue.

The session was anchored by Rajiv Raghunath, Managing Editor, Media4Growth and Outdoor Asia.