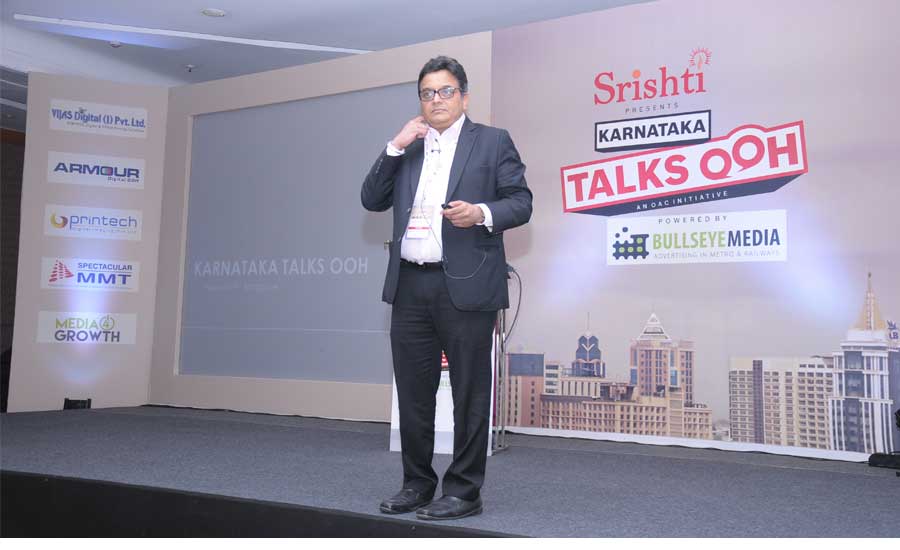 Suresh Balakrishna, CEO, South Asia & Middle East, Kinetic Advertising India spoke about the potentials of Karnataka’s OOH industry in his presentation on the topic ‘What pulls brand advertisers to Karnataka OOH’ at the Karnataka Talks OOH conference that was organised in Bengaluru on February 9.  In his comprehensive presentation on theme, he cited the key benefits that Karnataka OOH market offers to advertisers, such as:

•    Long term branding opportunities
•    Absorbency, ubiquity and scale; enchantment & entanglement influence consumers in many ways
•    Unrivalled creativity, innovation and flexibility; and now emerging digital technology are unique offerings
•    Consumers’ use of mobile on the move makes OOH a powerful tool for driving digital behaviours
•    No other medium harnesses the power of location and context like OOH.

With reference to the Bengaluru market, Suresh cited that as per ADEX Jan-Dec 2017 data the city accounts for 14% for the total OOH spends in the country, whereas only 1% goes to Rest of Karnataka. Bengaluru has the highest per capita OOH media density, ahead of cities like Delhi & Mumbai. Also, it is one city where OOH offers incremental reach when amalgamated with other advertising platforms; especially print and radio find a huge increase in tandem with an OOH campaign.

He spoke about the recent campaign of Netflix executed by Kinetic Advertising India. To promote its new series named ‘Altered Carbon’, the brand employed only OOH media in Bengaluru and Mumbai; the media delivered impact and dominance, end-to end coverage and positive feedback.

Suresh also touched upon the factors that make Karnataka a sure-shot profitable destination overall. Foremost, Karnataka has a vibrant retail culture. Three big malls have come up in the last one year and Prestige group’s Forum Shantiniketan (60,000 sq. ft retail space) & Mantri Arena are expected to open this year. Moreover, global brands are entering India through Bengaluru. Also, Suresh highlighted this market did not experience any real estate blues despite the fallout of demonetisation and GST implementation.

Kempegowda International Airport, Bengaluru, one of the important OOH destinations not only in Karnataka but nationally as well, is the 3rd busiest airport in India and ranked 35th busiest airport in APAC. The airport has been witnessing surging growth year-on-year with passenger traffic at a record high in FY 2016/17, at 22.9mn passengers and continues to grow at 21%, wherein Delhi and Mumbai airports grew at only 15% and 8%, respectively.  Moreover, the biggest advantage of this market is that it houses various big-ticket advertisers such as Amazon, ITC, Titan and Britannia.

Suresh also highlighted the economic growth of the state which is directly proportionate to the buying capacity in the region. Karnataka state’s per capita income is 38% higher than the national average. Bengaluru is the 2nd most affluent city in India. Since 2016, the FDI growth has been phenomenal in Karnataka; also, this state accounts for about one-fifth of FDI that the entire country received in the 1st two quarters of 2017-18.  The budding start-ups in the state are turning into world leaders.

However, he said the low spends in Rest of Karnataka is a cause for concern. He felt that the OOH industry concessionaires have failed to assess the potentials of the Rest of Karnataka markets. These markets also need to be made more attractive for brand marketers.