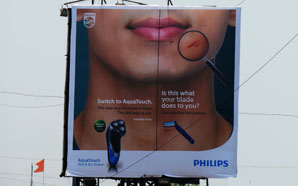 Posterscope India launched an OOH campaign for Philips Consumer Products to promote and boost the visibility of'Aqua Touch - Wet & Dry Shaver'. This campaign, executed in seven major cities for a period of 30 days, communicates that "Aqua touch protects better than the regular blade for both Wet and dry shaves!â€

The campaign showcases the creative highlighting the comparison between Philips Aqua Touch Shaver and a conventional blade.

Commenting on the campaign execution, Haresh Nayak, MD, Posterscope India said, "The aim was to make Philips Aqua Touch stand out among other outdoor ads and communicate the message of being the only shaver which can be used for wet and dry shaves. To enhance the communication and create a larger impact, we chose hoardings of a large format along with large mall faÃ§ade which helped us grab eyeballs among the right TG.â€
Tags : Posterscope India Philips Haresh Nayak
Advertisement