'Open Up with Half Rate Calling @ Rs. 22' is the new OOH campaign launched by Tata Docomo to educate customers on their new tariff plan in rest of Maharashtra with an innovation done in Pune. 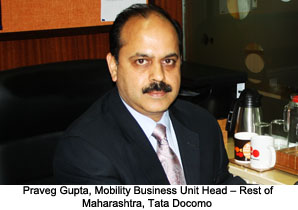 Tata Docomo, along with creative agency Draft FCB Ulka and outdoor agency Milestone Brandcom, has created an outdoor campaign wherein human need for emotional expression is the key element. The campaign has hoardings with an image of a person portraying two different facial expressions --- a happy one and a sad one. An innovation has been done using motor mechanism which helps in the movement of one mask over another giving the impression of a sad person transforming into a happy one after opening up and in the process revealing laughter, sharing, talking and communication.

The idea behind the campaign was all about helping people overcome their hesitation to share their emotions and thus communicating the message'Open up and express'.  The brand's new tariff plan was promoted in sync with this concept.

The outdoor formats used for the campaign include bus shelters, pole kiosks and hoardings.

Draft FCB Ulka and Milestone Brandcom planned and executed the innovation at University road, the most prime location in Pune.  The campaign was up for 20 days, from September 20, 2013 to October 10, 2013.

Praveg Gupta, Mobility Business Unit Head - Rest of Maharashtra, Tata Docomo, said talking about the campaign, "The campaign works on a simple insight that often in conversations, what is left unsaid is more significant than what was said. The moment a person overcomes his hesitation and speaks his mind, the sheer joy or relief of the speaker and the magic that ensues is what our brand thought of communicating in the'Open Up' concept. Pune, being a young city, our effort is to connect with the youth of the city and get them to talk, share and discover. We are confident that this campaign will create a new benchmark in the innovative outdoor marketing space.â€
Tags : Tata Docomo Praveg Gupta Draft FCB Ulka Milestone Brandcom
Advertisement