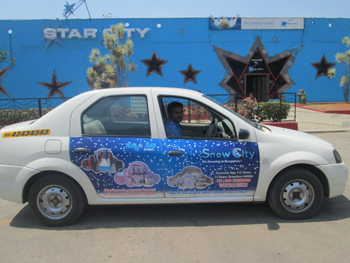 The main objective of the road show was to promote Bangalore's new amusement park'Snow City'. About 100 Easy Cabs were chosen and were branded with Snow City creative on their doors. The creative message is written in a mix of English and Kannada. CashUrDrive team took just one day to execute the 100 cabs for the road show which started from Snow City parking lot and covered the entire city. Raghu Khanna, CEO, CashUrDrive commented about the OOH activity saying, "We suggested the road show to the client keeping in view, the campaign TG and idea. About 100 cabs assemble was done for first time in Indiaâ€.
CashurDrive marketing is India's leading vehicle wrapping company, specializing in the concept of Vehicle Wraps. Increased number of footfalls in Snow City denotes the success of the road show. The positive response is the result of fruitful alliance with Easy Cabs. Pravin Dubey, Sales National Head, Easy Cabs says "It is pleasure to work with CashurDrive and Snow City. It was the first in India that a road show of 100 taxis was executedâ€.
Tags : Snow City Easy Cabs CashurDrive
Advertisement