Roti with a reminder

A path breaking idea, sometimes delves into the simplest of all thoughts! HUL promotes Lifebuoy and the habit of washing hands before meals at the Maha Kumbh Mela, in just this way. 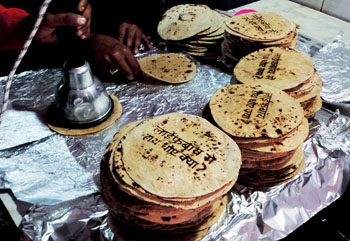 Lifebuoy along with its key activation partner Ogilvy came up with a rather intriguing and innovative idea to promote washing hands before meals, and establish Lifebuoy as the ideal brand to do so. The ambient campaign and activation was a classic blend of an amazing opportunity and an outstanding idea. The opportunity was the Maha Kumbh Mela, a massive festival of faith, conducted over 25 days and visited by over 100 million people. Lifebuoy India saw this as the perfect opportunity to reach out to a large group of ordinarily inaccessible sections of society and to get our message across.
"Lifebuoy, India's leading germ protection brand has always furthered the cause of hand washing with soap to prevent the spread of infections. In this Kumbh, Lifebuoy hopes to aid the patrons and attendees by reminding them about the importance of washing hands and protecting oneself from germs. Lifebuoy is spreading this message across the Kumbh area through the'Roti Reminders'. To ensure that this message gets converted into action, we have placed free soaps in the wash basins in these hotels,â€ says a HUL Company Spokesperson. 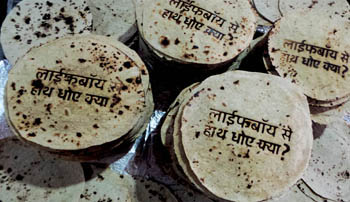 Vipul Salvi, NCD from Ogilvy says, "We created a heat stamp, which has no ink and is completely edible. We went through seven attempts, where for the first six times the stamps failed and finally the seventh time we got it right. Once the stamp was cracked the production of the same in huge numbers was critical, as we were nearing the starting date of Kumbh Mela. And the final stage was tying up with maximum number of hotels, dhaba and eateries, which was about more than 100. Promoters were required to convince the eating joints that it was for a good cause and it was safe and that the consumers will not get angry with the writing. Training the promoters was yet another task; it took us three days to do so.â€
Sameer Gupte, President of Ogilvy says, "The idea was the key here; it is a simple one, the first thing that comes to somebody's mind on seeing this campaign is'maine kyun nahi socha' (how did I not think of it). Further on, it is a brave idea, a unique one and the client was encouraging enough to help it see the light. The fact that a roti is the medium here makes it an unforgettable message, one will always say'maine ek aisi roti khai thi' and while two people experience it they will spread it and at least 20 will know it, which is what we call the power of idea.â€
Tags : Lifebuoy Ogilvy Vipul Salvi
Advertisement