Clutter describes the condition of today's visual and promotional landscape of OOH industry. A panel discussion at Kerala Talks OOH 2015 threw light on how grabbing the attention of a target audience is an increasingly significant challenge faced by the industry. 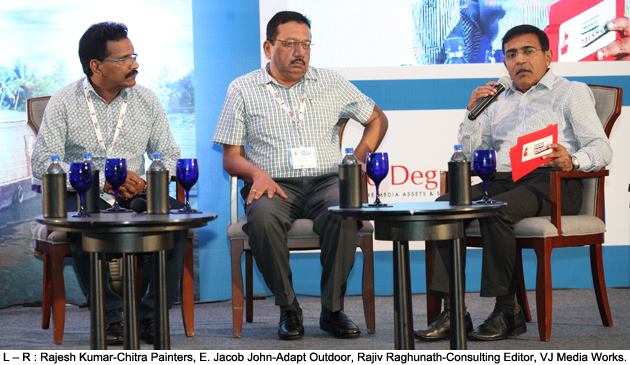 Outdoor advertisement is part of daily life and city landscape in urban areas. The out-of-control growth of OOH media placement can hide the characteristics of the city's architecture and even cover its image. Speaking about the clutter in Kerala's OOH industry, Jacob John said, "OOH industry in Kerala is absolutely cluttered. As we all know, when the cities grow, the clutter in outdoor media will also increase. Here, a huge number of hoardings are placed in the nook and corner of every city. Billboards of different size compete with each other for space available at almost every roundabout, on major highways and roads. The end result is clutter, which forces us to see what value these billboards are delivering to the brands as the visibility is greatly reduced.â€

Talking on the same, Rajesh Kumar added, "All metropolitan cites in India are facing this problem in the outdoor industry. Kerala is the only state having a strongest outdoor association, yet clutter is a major problem faced by the industry. KAIA has a policy to limit this issue. We presented this policy in front of the authorities, which clearly mentions about keeping distance from one hoarding to another. When billboards compete intensively for target audience eyeballs, the visibility greatly reduces and money paid for billboards as tax to the government is wasted.â€

Innovation is the key element to stand out in this medium to sustain the brand message. While discussing about this point, Jacob John said, "Innovations may be a solution to overcome the clutter. But the situation in Kerala is quite different. Some clients need campaigns for seven to fifteen days only. Creating an innovation for these short duration campaigns could not be acceptable, as it involves time and money. We are unable to spend too much on small campaigns.â€

Speaking about an approach to break the clutter in OOH industry, Rajesh Kumar said, "Government has to take immediate action by regulating the OOH industry in Kerala. Taking action against illegal hoardings by implementing new regulations will help to reduce the clutter upto an extent. Digital OOH is also a considerable one. But in Kerala, the authorities are not offering support to implement digital media. This has to change. We can also maintain the existing hoardings rather than placing new hoardings.â€