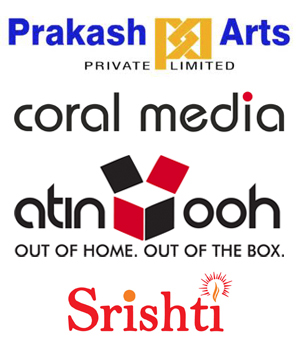 The Outdoor Advertising Convention (OAC) 2017 that will be organised at Renaissance Mumbai Convention Centre Hotel, Powai, Mumbai during July 28-29 this year has generated significant sponsorship interest. The very fact that the Convention returns to Mumbai -- which is one of India’s OOH industry hubs -- itself has created renewed interest among the industry stakeholders to participate in the Convention in a bigger way.

Prakash Arts, one of India’s foremost media owning firms with strong footprints in the southern markets, has been a sponsor of the annual convention for several years now. The firm’s leadership views the Convention as a compelling forum for all stakeholders to come together as a strong combine to reinforce the OOH industry’s stakeholder engagement in the country’s physical infrastructure development projects. Prakash Arts attaches key significance toward meeting developmental goals and citizen needs while developing OOH properties.

Bengaluru-headquartered Srishti Communications, a key player in the railway media space with media ownership in India’s foremost railway stations, sees the OAC as a major platform for knowledge exchange and business networking. In view of this, Srishti Communications has taken up the Associate Sponsorship of OAC 2017, having been the associate sponsor of OAC 2015 and OAC 2016.

Hyderabad-based OOH media owing firm Atin OOH has taken up the sponsorship of The Quintessential OOH Quiz 2017, an open quiz show that will be hosted during the course of OAC 2017. The open quiz made its debut at OAC 2016 and generated widespread interest among the participants.
Bengaluru-based OOH firm Coral Media has taken up sponsorship of OAC for the first time. The Coral Media management team has actively participated in the earlier editions of OAC and now comes in as an Associate Sponsor.

OAC 2017, like all previous editions of the Convention, will have the participation of global and Indian OOH media owners, specialist OOH agencies, brand marketers, civic authorities, media and materials suppliers, printers, senior OOH industry professionals, as well as young OOH professionals.
The Convention is designed as a Catalyst for OOH Enterprise Growth and Industry Expansion. The mega event will have three key modules: Convention, Outdoor Advertising Awards (OAA) and Expo.