Login
Home » OOH News » OAC 2013: Activation will have its own role to play

OAC 2013: Activation will have its own role to play

Panelists discuss the role of Activation in OOH Advertising and explore the question of whether Activation is a threat to traditional OOH. 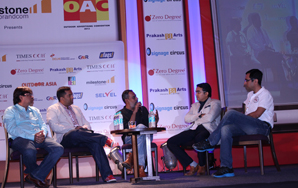 Deepak Jayaram from Groupm , popularly known as DJ, steered the discussion beginning with a clear definition  of Activation and questioning the  perception on Activation as being a poor cousin of  OOH.  The other panelists then took the audience through their respective brand's approaches to activation. Abhish enumerated the benefits of OOH as being able to deliver in a focused way and being impactful in a continuous manner, among other things. He also demonstrated the example of the Coke Activation campaign as part of the promo of the Bond movie Skyfall. According to him, OOH and Activation would go hand in hand and also added that the trend of activation would surely go up in future for most brands. He also cited some figures to illustrate new media consumption trends: 120 million mobile phone users connected to data, 350 bn minutes of streaming per day  (20 mts per sec) etc.

All the other panellists agreed that activation would have its own role to play and help traditional OOH in the multiplier effect. Abhish Chandhok also came up with a few other observations with regard to a point raised on the need for agencies to collaborate better.  His advice to agencies was: 1) Put brand before the business 2) Think Consumer