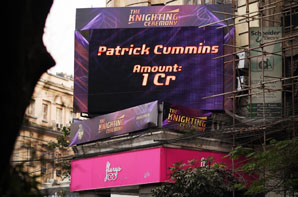 A giant LED board above the Flury's shop on Park Street in Kolkata beamed the Final KKR Team 2014 as the city welcomed the biggest cricket entertainment festival called IPL. The outdoor activation has been executed by Selvelnext, the new media wing of Selvel Advertising.

"When we thought about this initiative we realized that a lot of people do not know what an auction is and also, a lot of people have not been given the voice to speak about the team. The aim was to make the commoners more aware about the auction, which is the first and foremost part of the IPL series. Secondly, our aim was to make them the stakeholders through an interactive platform and it was possible through digital media. India being a mobile market, we thought that why don't we create a free missed call facility to voice their opinion regarding their team. Thus we literally devised 100 missed call numbers for the mass so that they could call and voice their opinion. This is not only helped in the auction but it also gave us the opportunity to build up a two-way relationship with the fan base of KKR and this will help us in communicating with them regarding anything, including match summary and such. The digital billboard is connected with a live server and as the result of the auction is coming out, the name of the player who is on board with KKR is instantly updated on the screen. We have also set up four other billboards in different transit points of the city. With the live action on the billboard with minute-by-minute update we wanted to give the feel of a carnival,â€ shares Manish Kumar, Chief Digital Officer, Red Chillies Entertainment. 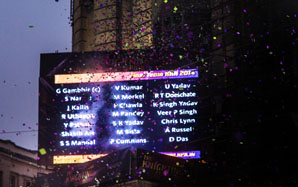 While sharing the execution details Sanya Mehta Vyas, Director Selvelnext, said "Selvel has been working on this plan to go digital and providing a new media which is experiential in technology and innovative. For our first project we tied up with KKR. We have a complete new team who would be giving creative and technical solutions to whoever is open to be experimental in outdoor.â€ Further in this regard Fahd Hussein, a core team member of the Technical Department of Selvelnext shares, "We are trying to create interesting models which are more interactive and palatable which would be suitable to any sort of outdoor environment be it in a high-street like Park Street or  inside a mall. We want to bring in new ideas and technology where people are just not passive listeners or viewers but rather they can get involved in the whole process of knowing the brand and their activity. Projection Mapping in outdoor is also an area which we are looking into. We have started here from our own city Kolkata and would operating for creating experiential projects. KKR gave us a great opportunity to create really something innovative for them and we got a tremendous response from the people and fans of the team who received the chance to voice their choice of players. In a very short span of time we executed the whole innovation and the support of the respective authorities made it possible for us as well.â€

"The concept was to create something new and innovative through some live action and here with the help of this LED screen Kolkatans got the accurate information instantly about the biding,â€ said Anirban Bose, General Manager, Selvel Advertising Kolkata.

Apart from this, the brand team of KKR arranged for an on ground activation where people have been given free recharge coupons, food coupons and many more to the crowd who were all part of the celebrations.