It's Time for outdoor advertising in India to evolve: Emraan Kureshi

Media has transformed newspapers into e-papers and television into mobile apps and now is the time for the outdoor to evolve. 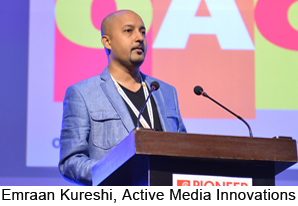 Media has transformed newspapers into e-papers and television into mobile apps and now is the time for the outdoor to evolve. This was emphasized by Emraan Kureshi from Active Media Innovations while speaking on'How Innovatively can we transform OOH?'

On'why innovate' and'why the need to transform', Kureshi argued that the current scenario in OOH was confusion on where to advertise, lack of space and engagement with users as well as price rise. All this calls for transformation, evolution and innovation. It can also create high PR buzz and lead to instant digital sharing through social networking sites.

Kureshi, who started his work from a cyber cafÃ© in Mumbai and now runs offices from the Middle East, Europe and the United States, provided interesting details and innovations his own company took to innovate within the outdoor space. He shared several campaigns where they engaged technology effectively to engage customers through virtual reality, augmented billboards etc. The need of the hour in outdoor advertising in India, concluded Kureshi.