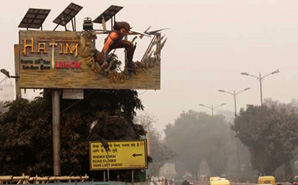 Life OK channel execute an innovative 3D OOH campaign to create word-of-mouth publicity for its new show'Hatim'. The objective of the campaign was to create a space in GEC shows and catch the audience's attention. The campaign saw three different 3D innovations carried out in Delhi and Mumbai for a duration of three weeks. Bates CHI handled the OOH duties of the show and Dream Design & Display India fabricated the innovations.

The innovations were drafted around the main character of the show i.e. Hatim, showcasing his power and strength. The Delhi innovation displayed Hatim breaking and coming out of the hoarding whereas in Mumbai, the innovation exhibited Hatim catching the Bat, and other wild animals, which was built with the help of two hoardings.  Another innovation was also carried out on cantilever where Hatim was showcased lifting the whole billboard. Supporting the images, the copy focused on reiterating the show name and its starting date and time. EPS coated with polystyrene material was used as it is very light in weight but strong enough to withstand all seasons. It was a challenging task for the fabricator agency given the tight time lines, they pulled it off successfully.
Tags : Life OK â€˜Hatimâ€™ Bates CHI Dream Design & Display
Advertisement