RoshanSpace Brandcom has positioned billboards across Mumbai to initiate a conversation with thought provoking and catchy lines and questions. 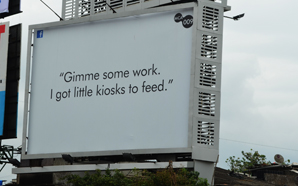 RoshanSpace Brandcom, the Out-of-Home brand activation specialist, has recently launched a'Billboard Talking' campaign across Mumbai to empower billboards with the ability to initiate a dialogue with the audience. Breaking the traditional perception of the billboards as being big, Roshan Space has positioned these billboards as an interactive and dynamic medium of communication to initiate a conversation in a unique way to the consumers.  It is an ongoing campaign that began during the middle of September.

The talking billboards with white base and black font catch the attention of the audiences with an interesting and relevant quote or a question like "What if I had a voice?â€ or three billboards together voicing their impact through a quote like "We work thrice as hardâ€ and "Shine bright like a diamond Neon and "We're beautiful like diamonds in the skyâ€.


The Billboards are placed at prominent locations in Mumbai such as Worli, Prabhadevi, Mahalaxmi, Mahim Causeway, Bandra Linking Road, Juhu as well as on the Western Express Highway including Bandra, Vakola, Andheri, 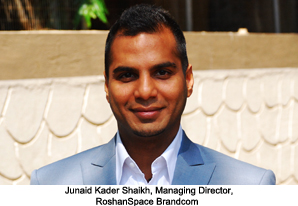 "The Billboard Talking is not just a campaign, but an idea that continues over time. We believe it's time to give billboards the voice they deserve and have earned over the years. In this process, we believe that we should all explore the extraordinary power of the OOH medium to communicate uniquely and individually. The differentiating factor apart from an area specific unique code is that the billboards reflect a live sentiment and strike a chord with the audience. The'Billboard Talking' concept empowers each interactive billboard to activate a conversation that ignites the minds of consumers within its outreach,â€ said Junaid Kader Shaikh, Managing Director, RoshanSpace Brandcom.