Arghya Chakravarty to speak on talent management at OAC 2015 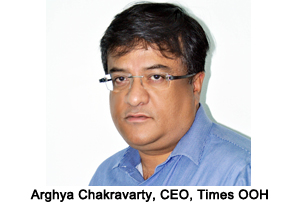 Even as the OOH industry gears up to grow its share of the overall advertising pie, OOH firms - large, medium and small alike - will be called upon to reinforce their own human capital in order to effectively leverage the emerging business growth opportunities. Times OOH is one organisation that has taken strident steps to build a highly capable team.

Arghya Chakravarty, CEO, Times OOH, will speak about the critical importance of talent management in the OOH business while addressing the session on'How to attract the best talent to build OOH business competitiveness - pros & cons' on Day 2 of the Outdoor Advertising Convention (OAC) that will be held at the Renaissance Mumbai Convention Centre Hotel, Powai, Mumbai during July 24-25.

Arghya moved to Times OOH in September 2013 and took over as CEO from November 2014. He came in from PepsiCo, where he was working as Executive Director, Sales (Beverages). He joined PepsiCo in 2007 and has served in different roles across geographies including critical assignments like General Manager - South.

He has more than 18 years of experience, during which he has worked with several prestigious organisations like Asian Paints, Akzo Nobel Coatings and Tata Steel.

Arghya holds a post-graduate degree in management from IIM Calcutta. He is also an electronics and communication engineer from BIT Mesra.