The citizens of Kolkata witnessed an unprecedented activation to mark 10 year celebrations of 93.5 Red FM through an innovative outdoor campaign done for the first time in India. 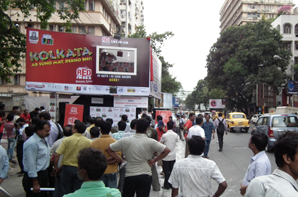 Celebrating the 10th anniversary of 93.5 Red FM Kolkata, the most popular radio station of the country launched a unique out-of-home activity by conducting a series of live radio shows from a studio in-built on a hoarding executed by Adhunnik Mercantile Pvt. Ltd.(AMPL), the outdoor media partner of the brand.  As a part of this activity, Red FM's evening prime-time show U-Turn went live on-air from the hoarding for ten consecutive days during 5 pm to 9 pm. Prominent celebrities of Kolkata joined RJ Praveen of U-Turn along with other RJ's for the ten hoarding studio shows under the flagship banner of Red Live, the live events property of Red FM. The entire activity has become the talk of the town as it is being promoted through an extensive media plan covering TV, print and digital besides OOH.

Nisha Narayanan, Chief Operating Officer, Red FM, said, "93.5 RED FM is the first radio station in the country to create such an innovation. We always strive to connect with our listeners and entertain them, wherever they are. To complete ten years in a city that boasts of such rich heritage and culture is a joyous occasion indeed. The live performance by Shalmali Kholgade last Sunday was a superhit in Kolkata, and concluded our series of ten concerts. Now Red FM is all geared up for these live shows from the hoarding studio.â€

The objective of Red FM was to create something exceptional in terms of on-air and thus they conceived this idea of creating the live studio on a billboard. The 20x10 backlit live hoarding on Camac Street, a premium location of the city has attracted number of eyeballs giving a reflection of Red FM's endeavour to set higher standards of radio programming and entertainment everyday for their target audience. The depth of the hoarding is 8ft.which gives the look and feel of a real cubicle of a studio from outside giving an uniformity in terms of the purpose of a studio on a hoarding. As the objective is to have regular broadcasting from this busy street air-sealed glasses has been used for the studio having air-conditioning inside. 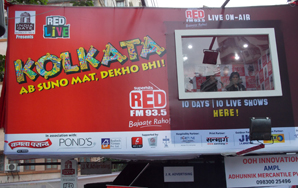 "Being initiated for the first time in the country, today through OOH again Kolkata is highlighted on the map of the nation. A complete studio built on to a hoarding, on our tenth anniversary for ten days at a stretch with ten live shows is the USP of this project.  This idea was at the back our mind and we selected out-of-home with the aim to create a differentiation in terms of visibility and communication. Constructing it solidly by ensuring all the safety norms perhaps has been a great challenge and an invaluable experience both for us and AMPL,â€ shares Jimmy Tangree, Station Head, Red FM.

Nimesh Shah, Director of Adhunnik Mercantile Pvt. Ltd.(AMPL), informs, "We have created such innovation for the first time in Kolkata. The challenge was to select such a spot where the footfall is maximum with bigger footpath as the idea is to attract listeners who can now not only listen but see a live studio. Thus the wider diameter of this pavement is an advantageous factor because here we can have a crowd pull without disturbing the traffic on road and as the back of the hoarding is also spacious the cubicle for the studio could be adjusted easily. We have got lot of support from Debasis Kumar, MMIC- Advertisement(The Members, Mayor in Council) Kolkata Municipal Corporation and the Kolkata Police.â€