Moving Audiences is initially targeting OOH markets in six ASEAN countries and India; 28 media owners of over 2,000 digital billboards in six Asian countries have already agreed to trade their inventory on the Moving Audiences platform 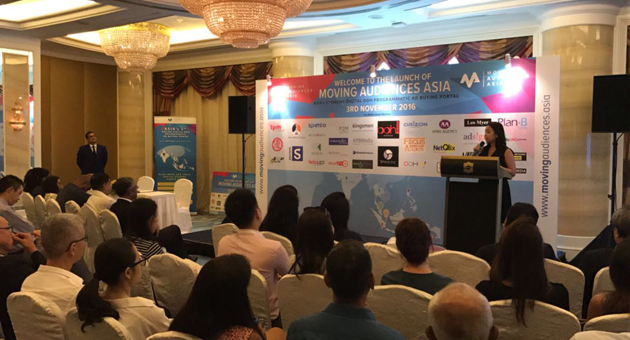 One of Asia’s first unified online platforms for DOOH that allows media buyers to plan and place advertising across thousands of billboards in Asia’s outdoor media market and measure target audience viewership, was unveiled recently in Singapore.

Moving Walls Pte Ltd (Moving Walls), a data and technology-led media company, said 28 media owners of over 2,000 digital billboards in six Asian countries have already agreed to trade their inventory on the Moving Audiences platform. The media owners include Singapore Press Holdings Ltd. (SPH), Southeast Asia’s one of the largest media company and owner of The Straits Times flagship newspaper, and MediaCorp Pte Ltd which groups companies engaged in television and radio broadcasting, print and digital media and film-making.

Moving Audiences is the first platform in this region to allow media buyers to plan and buy timeslots for DOOH billboards across borders. It uses an advanced algorithm that links the screens to determine which are available at what time and at what price. Media owners will be able to see which of their billboards are taken up at any time. “Driven by the growth of digital displays, the global market for outdoor advertising is poised to reach $50 billion by 2020, with the Asia Pacific region becoming the largest and fastest growing market (Global Industry Analysts). “Our platform brings digital efficiencies and measurement standards to a form of media that has been in the dark for too long. We look forward to leading this OOH revolution in Asia,” said Srikanth Ramachandran, CEO of Moving Walls.

According to a media of Moving Walls, “This platform will be a major catalyst to invigorate the traditional media sector, which has witnessed a decline in advertising in recent years. Worldwide, owners of media content and media assets as well as media buyers have been impacted by the “digital onslaught”, which has also led to lower newspaper subscription and television viewership. Despite this, the OOH media in ASEAN and Asia is expected to continue growing. Based on a 2015 PwC report, the OOH advertising market in Singapore, Malaysia, Indonesia, Philippines, Thailand and Vietnam will rise from $944 million to $1.27 billion in 2020. The Indian market will rise from $349 million to US$545 million.”

The Moving Audiences platform will provide aggregation, automation, and attribution to OOH media. By uniting media owners across the region, it aims at encouraging a transparent and efficient outdoor advertising trading system. Increasingly, media buyers and advertisers in Asia seek a simple, single solution to meet their needs across the region. Singapore is one of the important regional hubs for many of these players and the natural location to host this platform. In conjunction with this launch Moving Audiences announced that it was offering $20 million of billboard space across the region through The Great Outdoor Digital Sale (The G.O.D.S.) coming week. Media buyers will enjoy up to 65% discount to track rates for advertising space booked for 2017.

Moving Audiences has one of largest networks of digital billboards in Asia with presence in Singapore, Malaysia, the Philippines, Indonesia, Thailand and India and it seeks to unify Asian OOH media owners and embrace a transparent OOH measurement system that reports audience data. It uses proprietary algorithms to crunch Big Data from public and private sources to derive audience insights around OOH media assets.