The idea is to reach out to the relevant target group at every nook and corner of the city with a message about the change delivered in a very topical, quirky and 'Bajaate Raho' signature style. 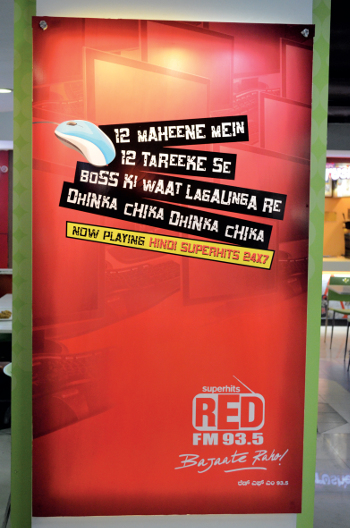 Bangalore's Red FM 93.5 has come up with a Mast Maja Madi OOH campaign in order to target their listeners and create awareness about their extra value added proportions in them. CROSSROADS team designed the campaign that communicates the core message "Red Fm 93.5 Now playing only Hindi super hits 24x7â€ in a musical note format for a month.
The idea is to reach out to the relevant target group at every nook and corner of the city with a message about the change delivered in a very topical, quirky and'Bajaate Raho' signature style.
Though the other mediums were used, 70 %-80% advertising share was spent on OOH medium. The OOH campaign is supported by an aggressive on-air promotion and a digital campaign on the website and social media handles.
"Bangalore has a very unique, yet clearly defined demography. With our understanding of the outdoor eco system and consumer understanding intelligence from RED FM sales and marketing team we identified the touch points, which were then scanned for the best available media to deliver the fun, quirky communication.â€ says Mr. Lokesh Kumar, Director of CROSSROADS.
30 billboards, 15 BQS, 100 pole kiosk and 225 MERU cabs were used creatively to reach out to the target group. Ambient mediums has been put into effective use at prominent locations in Bangalore; Mantri Mall, Forum Mall, Garuda Mall ,PVR - Orion & forum , FAME ,12 bowling alleys at amoeba , IT Parks - RMZ nxt , RMZ infinity ,EGIL ,ITPL and Manyata Tech Park.

The direct response from the audience measures the success and popularity this campaign has fetched for Red FM. The correct and positive response received for RED FM's On Air / Online contest conducted by their Radio Jockeys - "Identify the creative, location and the media on the RED FM outdoor campaignâ€ is clear cut proof of its popularity.

The audience not only remembered the exact lyrics, they also knew the location and the media details. "The campaign objective to communicate the repositioning of RED FM Bengaluru as Hindi superhits 24X7 has met. We are extremely optimistic about the change made in Bengaluru. 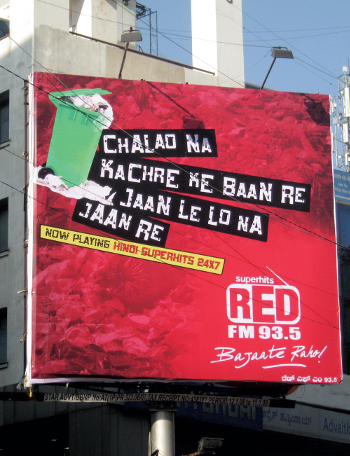 The initial response has been very encouraging and we would continue build and market the new programming in the coming year.â€ says Nisha Narayan, Sr. VP, Programming & Projects, Red FM.
Advertisement