Parle Products, manufacturer of biscuits and confectionary, sent out a social message with an impactful outdoor advertising. The brand extended its countrywide'Litter Free' CSR project and launched an OOH campaign in Delhi NCR on the back of its nationwide TV campaign. The initiative, developed by Havas Media Group's OOH and activation brand Havas Media Active, planned to take forward Parle's anti-littering message in an outdoor setting. The outdoor push was organised to amplify the powerful messaging by creating a live, interactive, community experience increasing the chances of its successful adoption as a day-to-day habit. The campaign encourages citizens, in particular the youth, to dispose garbage in a correct manner - in the Dustbin!

Commenting on the campaign, Pravin Kulkarni, GM Marketing, Parle Products Ltd, said, "Indians are habituated to consuming products and thoughtlessly pitching wrappers adding to the volume of littering in public places. Our Parle products have disposable wrappers, so we wanted to talk to people, to our youth - to educate and create awareness about this irresponsible behaviour. The OOH campaign is aimed at capturing our youth's attention, in their environment, with peers and passers-by; prompting conversations and driving them to take responsibility and stop littering. We are already seeing that littering has reduced in targeted locations.â€ 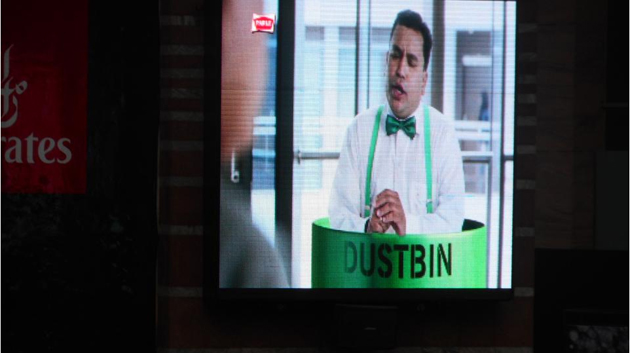 Anita Nayyar, CEO, Havas Media Group India, explained "We are glad to take on and execute this'meaningful' initiative with Parle Products. Dirty surroundings are unhealthy, unsafe to society and allowing littering to continue is akin to saying, it's acceptable. Parle has taken a stand to go Litter Free and wanted to talk to our sharing youth generation in their everyday surroundings. We decided to take the OOH route and zeroed in on Delhi NCR to catch en-mass this audience. To give a sense of scale, Cyber City alone has 4 lakh working professionals and 50,000 visitors every day which this campaign is addressing.â€

"Parle is a great brand and we have grown up eating Parle G. This initiative connects with the new age audiences in a very meaningful and engaging manner and further enhances the relevance of Parle among the new age audience and in the community at large," continued Mohit Joshi, MD, Havas Media India.

"These are smoke-free buildings, so the ground floor becomes a catchment for smokers and cigarette vendors. Havas Media did a physical audit for a week and found that people do not use the dustbin near the cigarette kiosk, it gets pitched. We are looking to effect a change in smoker behaviour and you will soon start seeing Parle branded Litter Bins inducing smokers to use them. We see our concept of this surround messaging touch our youth enough to take their trash to the dustbin and spread the message when they see someone else pitching,â€ added Ankur Rastogi, MD, Havas Media Active.