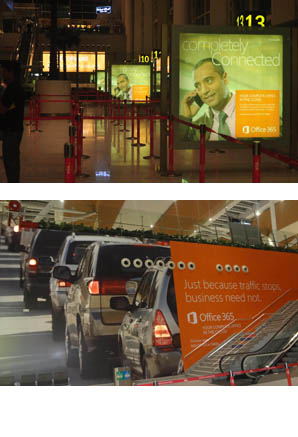 Traffic is always cursed for hampering the work especially in metro cities. Therefore to resolve this issue, Microsoft has come up with a subscription-based service which offers access to various services and software built around the Microsoft Office platform called Microsoft Office 365. Considering the target audience, IGI Terminal 1 happened to be the best display area to showcase the new cloud platform.
The idea was to draw a highly visible campaign to make a strong impact at the entire boarding area with an awe-inspiring brand presence. In addition to the existing media, a 1700 sq ft wall wrap was also offered to the brand for the launch campaign. Along with the huge site size, the creative was also made to capture the eyes of the travellers. A number of LED blinkers were amalgamated with the creative to ensure a stunner.
The LED lights were installed on the wall with the vinyl wrap and were connected to the electricity to make them blink. This gave an illusion of cars stuck in traffic jam with their brake lights going on and off.
Initially the campaign was built for 15 days, but the positive response convinced the brand to extend it without second thought and they are keen to acquire more innovative footprint in terms of size, scale, innovation and impact in the same vicinity. The site belongs to Times OOH.
Tags : Microsoft Office 365 IGI Times OOH
Advertisement