HBO, in association with DDB MudraMax, has crafted a new OOH campaign to reinforce its brand ideology of offering break free movie experiences on TV. 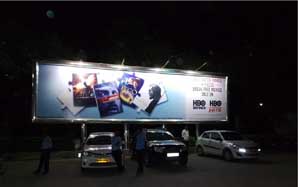 Popular English movie channel HBO, which claims to show 100% commercial free movies on HBO Defined and HBO Hits channels that were launched this year, decided to reinforce its brand philosophy, and rolled out a high-voltage OOH campaign in association with DDB MudraMax agency. The campaign was seen in Delhi and Mumbai cities, mainly at strategic locations.

The objective was to reinforce the channel tagline:'Break-Free movies' on the outdoor medium. Hence, the creative idea revolved around the concept of communicating that watching a movie on any other channel is like putting together pieces of a jigsaw together. The creative execution showcased this thought by showing different movies on different jigsaw puzzle pieces with the line - "DON'T WATCH MOVIES IN PIECES, BREAK FREE MOVIES ONLY ON HBO HITS AND HBO DEFINEDâ€.

"Our proposition was to communicate a first class seamless movie experience for our viewers through HBO Defined and HBO Hits. The campaign beautifully encapsulated this through the jigsaw approach while still retaining the premium brand image that HBO is known for,â€ said Shruti Bajpai, Executive Director, HBO India Pvt Ltd.

The agency team chose the media and locations strategically, keeping in mind the objective of the campaign. Only high impact sites at prominent locations with high traffic movement were covered, such as: Mahim Causeway, Haji Ali, Juhu circle in Mumbai and Nehru Place, DLF Cyber City Gurgaon, South Ex. in Delhi. The team also executed the "Cut innovationâ€ with the 4 jigsaw pieces jutting out of the billboard in 2 sites each in Delhi and Mumbai. 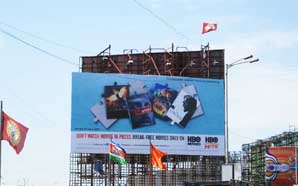 The challenge faced by the agency was to communicate the new ad-free channel in a different way in this cluttered market in order to provide maximum visibility.

Commenting on this Subhashish Sarkar, Sr. VP, DDB MudraMax OOH Delhi said, "HBO Hits and HBO Defined together make a very compelling case for movie-buffs who now have the choice to enjoy their favorite titles from the comfort of their own homes. A contemporary release without the irritation of having to sit through commercials is a godsend. This needed to be underscored boldly and to the prime audience.  As before, the team at DDB MudraMax profiled the consumer flawlessly and laid out an OOH communication that received positive feedback in no time at all. The campaign had barely been 48 hours out there before people began calling back wondering about the depth and spends of it, always a good sign correlating to visibility. We are happy to have partnered with HBO in yet another successful communication of a stellar offering.â€