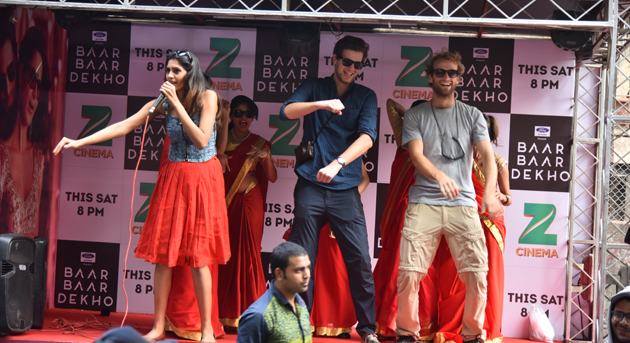 As a prelude to the premiere of Bollywood film ‘Bar Bar Dekho’ on Zee Cinema, the channel picked out the popular number “Kala Chashma” from the movie to run its high-decibel OOH activities. Apart from hoardings with giant dark shades (embodying the kala chashmas), Zee Cinema deployed several vans with large branding of the movie. To depict the picturisation of the song in the Siddharth Malhotra-Katrina Kaif-starrer movie, where the actors were dressed as bride and groom, young people dressed in wedding finery rode those vans. 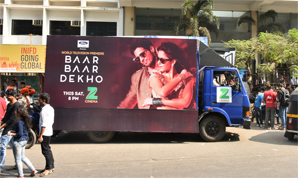 The activations were rolled out in Mumbai’s young hotspots like Mithibai College, Wellingkars, Ruia college, Rizwi college and were followed by a ‘Kala Chashma’ parade on Linking Road and Carter Road, while the same was followed at Delhi-NCR’s MET University, Atta Market, DLF Mall, Wave Mall, Delhi Institute, Great India Palace, Worlds of Wonder and Wave City Centre. To take the idea to the next level, recently wed TV celebrity couple Kishwar Merchant and Suyyash Rai flagged off the rally.

Emraan Kureshi, Director, Active Media Innovations, who executed the activities, said, “Think about a huge brigade of 100 couples across cities like Mumbai and Delhi, dressed in similar costumes, and installation of a mega ‘Kala Chashma’ in a canter. Executing all of these on the same day was quite a challenge, especially when permissions from the authorities to conduct such a mega stunt wasn’t easy. The objective was to make this event into a real show-stopper as well as traffic stopper. It also went viral on social media platforms.”