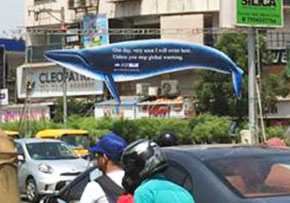 Fashion brand JadeBlue launched an impactful campaign to mark the World Environment Day. The campaign featured a 40-feet whale installation on the roads in Ahmedabad with a cautionary message on global warming. Four such installations have been put up in the city in association with Fresh Lime Soda (FLS), a creative agency.

The 40 feet cutouts of the Blue Humpback Whale were first printed on flex and mounted on boards and put up with wires. FLS selected the locations that ensured good visibility for the displays without hindering the traffic movement.

Overall, the campaign has a 360 degree coverage, including outdoor, print, digital and ambient media. Apart from that, JadeBlue also distributed free saplings at their 20 stores across India, and special shopping bags featuring the environmental message.

“Global warming has always been such an important issue and we thought that placing the cutout of a large creature like the whale near the road would serve as a grim reminder of the future,” says a brand spokesperson.

The brand has taken several more initiatives to drive home the message on protecting nature. These included messages to save the green cover, protecting the birds, saving trees, etc.