Becoming the first one in the entertainment industry to resume work, Hoichoi wants to make audience feel its presence again

Hoichoi, an Indian video streaming and largest digital Bengali content platform, has made a comeback on the streets of Kolkata to announce that it’s ready to stream its biggest release of the first half of the year, Tansener Tanpura.

Under unlock phase 1, Kolkata has opened its roads, offices and leisure areas for the public but, big billboards were the things that were missing in the city. Hoichoi with its much-awaited series, Tansener Tanpura decided to launch an outdoor campaign. Becoming the first one in the entertainment industry to do this will help Hoichoi to take the excitement of audience to the next level. 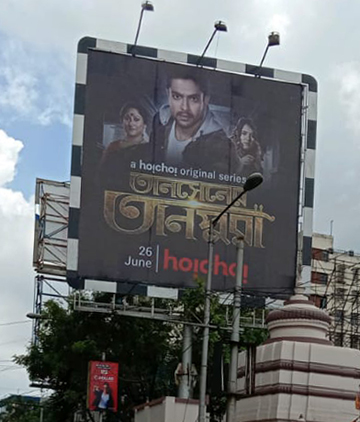 The OTT brand has selected king-size formats of different variety such as hoardings, FOB and many more for the announcement across the city.

Simultaneously, Hoichoi launched a brand campaign by painting the city red. This has been done to make its presence felt again and to bring back the joyful nature of the city.