The branding was executed on some 500 airport cabs in Delhi NCR, the overriding objective being to expand the Vodafone 4G customer base. 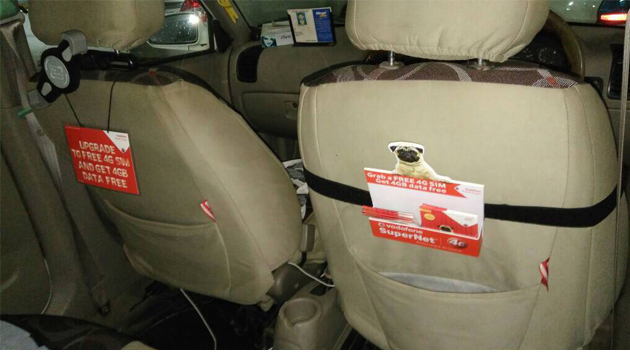 CASHurDRIVE planned and executed a unique transit media promotion of Vodafone India’s 4G service by turning cabs into ‘Vodafone Mobile SIM Dispensers’. The branding initiative that was taken in Delhi-NCR included putting a free Vodafone 4G SIM dispenser on the front seats’ back covers supported by free 4GB data for the mobile service.

CASHurDRIVE also branded those cabs with exterior creatives that said: “Grab Free 4G SIM Inside And Get 4GB Data Free”. The branding was executed on some 500 airport cabs, the overriding objective being to expand the Vodafone 4G customer base.

This was the first time that any telecom brand has initiated such a drive where commuters carrying 2G/3G Vodafone SIMs could upgrade the service to 4G while riding the cab. Customers could save on time they would spent visiting any customer care centre for the upgrade. Instead, the customer could get the upgrade within 20 minutes upon following the instructions given on the dispenser.

Raghu Khanna, CEO, CASHurDRIVE, commented: “We believe in exploring every possible experiential marketing tool to give a better experience directed towards the ultimate user of the product. The cabs will be on roads for a complete one month. We are looking forward to active participation and overwhelming response from the customers.”