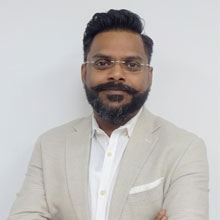 Sky Blue Media has played a catalytic role in the development of DOOH networks in Kuala Lumpur. Tell us about your company’s journey in this space.

DOOH screens were first operated in Malaysia by a company called Powerscreen, but there was no ecosystem to support that business. Sky Blue Media, that I founded in 2009, initially had the ownership of only static media. I decided to foray into the DOOH advertising space and brought in DOOH screens mounted trucks into KL. However, it was a challenge to convince the advertisers that their displays – that run in a loop -- would be noticed by the moving audiences.

I once noticed Canon branding on static lightboxes on a 1km stretch, and that gave me the idea of introducing DOOH screens in the city. I proposed to the local authority to introduce DOOH screens and eventually launched our DOOH network for commercial use in 2014 after surmounting very many challenges.

The advertising clients that were used to having displays on the large formats were slow to take to the smaller formats. Hence, to make the medium more attractive to them, we put up the DOOH media units that have head-on visibility, such as, on pedestrian bridges, for which again we worked with the concerned authorities to get the due permissions.

Soon after we created networked DOOH screens and gave us the competitive edge in the business. In time, other media operators like WOW Media and Laguna forayed into the DOOH space. I am glad that we have created a competitive environment for DOOH advertising, and that we have been instrumental in creating an ecosystem that supports this business.

Today, as we go programmatic, many small advertisers are getting the opportunity to use the DOOH media for their advertising campaigns.

Looking ahead, we want to grow beyond the Klang Valley and become a national player. And, our larger goal is to go beyond Malaysia to other parts of Asia, and one of my target markets would be India.

We did set up a small operation in Bengaluru but our initiative was affected the unclear local regulations for the business.

What percentage of OOH media here is digital today?

It’s 10-15%. The media assets in the CBD area are going digital, but that’s not the case with the media at high-speed driving locations.

Are you seeing a new class of advertisers coming to the OOH fold owing to the availability of DOOH advertising screens?

Definitely. We are getting new clients, especially smaller brands for whom advertising on the conventional OOH media was rather expensive. In Malaysia, the cost or printing and mounting for advertising on the conventional media is almost 10 times that of India, so only the big brands are able to use OOH in significant ways. Now, with DOOH, the advertisers don’t have to contend with the production costs, etc. So, it becomes a lot more affordable to them.

Also, the DOOH media environment is well regulated and that encourages the advertisers to put more money on this media.

As a media owner in the DOOH space, I believe this is a long-haul business. Fortunately, the authorities here are keen to listen to the industry, understand their business issues and frame the norms that help the industry. Further, when a tender is floated, they look into not just amount quoted in a bid, but also evaluate the company’s track record, marketing strengths, etc.

I believe that open tender is fine, but the decision to award a contract should not be limited to the amount quoted by the bidders.

Do you do your business directly with the clients?

No, 60%-70% of our business come from the agencies. Also, we don't just depend on the larger agencies. Instead we work with the smaller agencies too.

As you go programmatic, would you still depend on the agencies?

Definitely. You can’t change the business model in a single day.

Programmatic works well when working with clients that are data-driven. For example, we did a programmatic campaign for Food Panda, a brand that works with a lot of data that’s constantly changing. So, their media needs too change dynamically.

On a larger plane, the media landscape is seeing rapid changes today. There could be a day in the future when OOH is wiped out, with wearables likes glasses coming into the picture, whereby every floor or wall becomes a media. When that happens, on the same media you will see an ad that’s different from what I see. All the digital billboards will then become irrelevant.

What’s your plan for India?

I am always open to investing in India, provided the regulatory frameworks are right. We want to be in a city where we provide a network of screens. The norms should not change city to city. There should be national guidelines as under the Digital India programme.

Are you deeply involved in the functioning of the media owners association in Malaysia?

We are deeply involved in the association and we are a part of the Digital Committee.

We work as one in the association to ensure the regulatory changes are aligned with the real needs of our industry. Also, we engage in industry knowledge sharing with one another.

As such, the media operators do not face any major problems with regard to payments and the like, as in this market POs are released before any work is initiated.

‘Collaboration is key to growth’

‘OOH is often our go-to media’