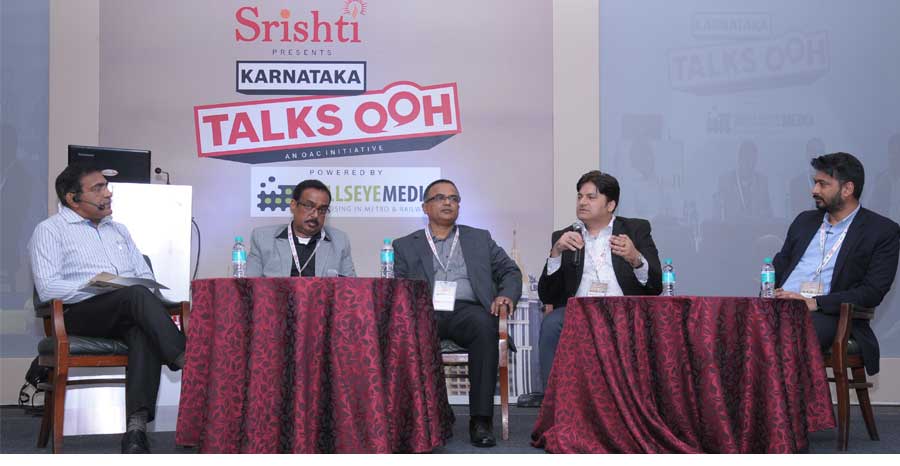 Abhijit began by putting across three crucial points which are supposedly changing the dynamics of this industry. First, he mentioned about the lack of an OOH measurement tool which is the bane of the industry. In 360 degree marketing, OOH media is served as dessert instead of the main course. He pointed out that blocking the OOH sites for long duration is harming the trade. Brands like VIVO and OPPO took up prominent sites for long periods owing to which many other brands could not effectively leverage OOH for advertising. He added that direct buying by media owners comes in the way of increasing brand spends in Karnataka markets.

Jayesh pointed out that the true potentials of the local markets need to be highlighted and brought to the attend of advertising clients. He observed that while the demand and supply of OOH media in Bengaluru is robust, the same cannot be said of the Rest of Karnataka markets that attract a mere 1% of total OOH spends. To some extent, underpricing of media is contributing to the low share of ad spends, but he asserted that the correction can happen only if the quality of media improves.

Fabian said that Bengaluru is a smaller market as compared to Delhi and Mumbai markets, and so the OOH spends in the city will necessarily be lesser than the two big cities, but a more innovative approach to OOH advertising could bring more brands into the OOH fold in the city.

Atul stated that every major national brand enjoys a strong OOH presence in Bengaluru, and site rates in the city have nearly doubled in the last three years. However, he echoed the views of the other panelists with regard to Rest of Karnataka markets. He urged the media owners of up-country markets to focus upon value addition to their media.

Atul also touched upon the legality issues; clients based out of different cities can’t really figure out the authenticity of the sites, so the local outdoor associations should come up with a road map to curb this issue.

Jayesh was of the view that large formats draw brand’s attention and if any regulator curbs are imposed on billboards, that will impact OOH business in significant ways.

Abhijit spoke about the need to usher in digital outdoor formats but clarified that more than digital, interactivity and invasion of technology will play a significant role in pushing the medium.

Responding to the query on the impact of IOAA-AAAI S-O-P on business, Fabian said that it is a noble initiative, but its proper implementation will take time. Also the advertisers’ feedback has been encouraging on this.