The 10ft by 8 ft. LED screen at the heart of the Gangtok city, is a first of its kind in Sikkim and reflects the untapped OOH potential in the city . 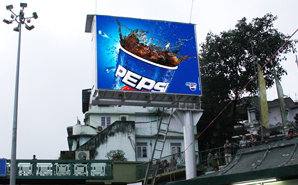 Exotic Media (Gangtok) and Spark LED (a division of Enkon Group) jointly installed a 10ft by 8 ft. LED screen at M.G. Marg- heart of the Gangtok city, making a first of its kind in Sikkim. Strategically placed in a pedestrian zone where most of the outdoor events and functions take place, the display lends a high-visibility quotient amidst the picturesque hills being positioned at an altitude of 4,500 feet from sea level. The LED offers the facility for playing video file and the bookings can be done for durations ranging from one month to three months and 6 months, depending on the need with slots at 10 sec, 15 sec and 30 seconds respectively.

Khenrab Wangchuk Dorjee, CEO Exotic Media, shares the various challenges faced, while executing the project, "This being a new venture in the hills, we had to understand the geographical challenges -- like rain, thunderstorm, hail,  etc,  and we had to customize our board accordingly. Getting the permission for the work order was another tough job, as it was a new idea. Besides, we were going to touch the most sensitive part of Gangtok i.e. the M.G.Marg, which the government protects at all cost, so it was definitely a challenge to us.â€ 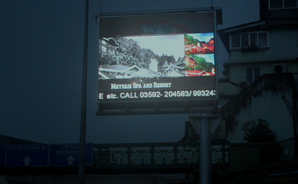 Aninda Banerjee, Managing Director - Enkon Private Limited, while speaking about this turnkey project from Spark LED, says, "There is a huge market for OOH advertising and it is mostly untapped and disorganized. The Government of Sikkim is extremely sensitive about Gangtok and there is a strict code of conduct for any installation. The hill station is exposed to severe winter and rainy seasons. Summers are not very strong and the condition of power supply is too unconditioned. So, Spark LED had to be very cautious and finish the installation in an extremely planned manner without any chance for mistake. The installation is a grand success and the implementation was witnessed by the Hon'ble Chief Minister of Sikkim and many other dignitaries.â€

"We have got positive feedback from various brands so far, like Aircel, Max etc., besides a couple of local enterprises; we also got work orders from the Central Government and State Government as well. The future of OOH in the hills appears good as 90% of the urban population is brand conscious and this initiative has given us an encouraging foothold over the market,â€ signs off Khenrab Wangchuk Dorjee.
Tags : Exotic Media Spark LED Aninda Banerjee Khenrab Wangchuk Dorjee
Advertisement