'She' is the star in this SET show on OOH

Sony Television's new campaign is all about celebrating the power of women on OOH and through on-ground activities. 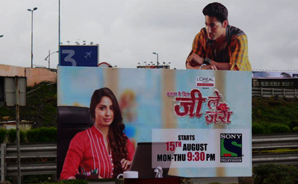 Sony Entertainment Television has launched yet another OOH campaign in Mumbai to promote its new show named Kehta Hai Dilâ€¦ Jee Le Zara. The story is about extra-ordinary women who balance their daily life with work pressures. Connecting with the theme, the channel planned to initiate an OOH campaign with interesting activities. The theme of the on-going campaign was "Women Empowermentâ€. The idea was built around the same concept by reaching out to seemingly ordinary women / working women who manage the course of their daily lives by taking care of their family and work. The campaign has been rolled out in six key cites and across Maharashtra for 14 days.  The OOH duties for the same have been handled by MOMS agency.

"The OOH campaign was designed to achieve two folds of objective. The first objective was to create an impact for the show with visual imagery of lead characters in a fresh manner. And another target was to build frequency with the sampling for the show. We have allotted 20-25% of our budget to OOH medium. Since our communication strategy was to provide comfort to the ladies audience, we initiated such activities which resonated with the audience and our communication theme,â€ said Gaurav Seth, Senior Vice President, Marketing & Communications, Sony Entertainment Television. 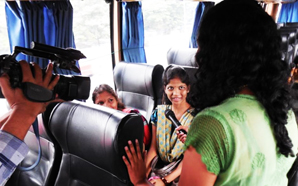 To showcase the larger-than-life imagery of the show, the campaign was executed with some innovations at strategic locations creating buzz and excitement. Also, to add frequency in the campaign, a wide mix of outdoor media formats has been utilized like hoardings, designer bus shelters, mobile vans, bus panels, station hoardings, kiosks, malls, multiplexes and LED displays. Along with this, huge cutouts have been placed at Mahim Garden in Mumbai with the show DDT and logo. There is also a rotator kiosk with different show layouts.

The campaign was designed to target women aged between 18 and 35 years. Therefore, the media planning was done accordingly and places were selected specifically to reach the TG. The brand preferred using huge formats to create an impact supported by the visual imagery. 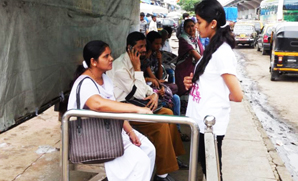 Along with conventional mediums, the channel also optimized on-ground activities in an interesting and strategic manner. The activity includes free bus services for working women to some of the important corporate hubs in Mumbai to make them feel special and secure. The idea was to offer them "Raahat ki muskurahatâ€ at routine touch points where they needed it the most. Lead actress Sangeeta Ghosh will flag off the activity from Goregaon Film city gate followed by further amplification on TV, Radio and Press. The buses were planned to run on different routes of the city such as from Andheri (E) station to MIDC, from Malad to Bandra / BKC/ Bandra East Stn) and from Goregaon Film city to Andheri Link/ Andheri stn / Juhu).  There were promoters wearing branded T-shirts with the show name and logo. Also the entire bus was wrapped with the show name and logo.

To enhance the effectiveness, radio announcements were done about the same. This also got coverage on various news channels and digital
media. 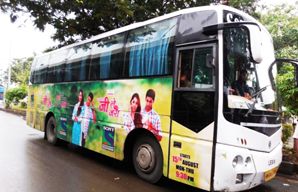 Commenting on the campaign, Dipankar Sanyal, COO, MOMS, said, "Keeping the objective and thinking in mind, we have used a mix of all outdoor media to create a buzz around the show. We have also created huge cutouts and the logo at key junctions.  It was a big challenge for us to execute the innovations because of the rainy season and bad weather.â€

"The response towards the show and the communication has been excellent. We are very much satisfied with the work done by our agency MOMS. The relation with our agency will continue to grow in coming times,â€ said Gaurav.
Tags : Sony Entertainment Television MOMS Dipankar Sanyal Gaurav Seth
Advertisement