RED FM in association with the Election Commission and led by the brand's RJ Praveen, a youth icon, drove the'Dabaa ke Bajaa' campaign supported by an app to target youth and urge them to vote. 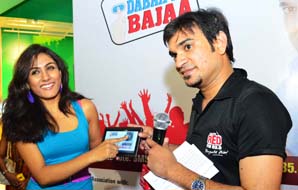 Radio channel brand 93.5 RED FM, in association with Election Commission, recently took an initiative to urge the people of Kolkata to vote . RED FM organized an outdoor event at Diamond Plaza, Dumdum in the city, to launch the campaign'DABAA KE BAJAA' in a big way. The brand's RJ Praveen who has been pronounced as Kolkata's Official Youth Ambassador by the Election Commission for this year's election, launched the campaign, targeted at increasing voter participation in the forthcoming General Elections.

As a part of the initiative, RED FM volunteers were also deployed all over the plaza with tablets and each member personally went up to the audience asking them to pledge by using the'Dabaa ke Bajaa' app. The youth ambassador of the Election Commission in Kolkata, RJ Praveen along with other RJs also presented RED FM anthem for the campaign LIVE for the masses. 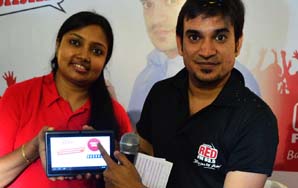 Commenting on the event, Nisha Narayanan, COO, 93.5 RED FM said, "Dabaa Ke Bajaa is our attempt at channelizing the energy of the people in all parts of India into one simple, and yet difficult act- pressing the button on the voting machine! We have partnered with the Election Commission of India to increase the voter turn-out in the upcoming General Elections, and we look forward to collectively mobilizing people, especially the youth, to come out and vote. RED FM, being the'Station For Expression' has always encouraged people to come out and talk. But this time, talking won't suffice- Button Dabao! We are proud to have associated with the Election Commission of India on this. The insights and associations that they bring to the campaign are invaluable. It is Red FM's humble initiative to get people to vote and we are confident that we will play a valuable role in mobilizing them to come out and vote in unprecedented numbers.â€