OOH is the cheapest medium to advertise: Chandramohanan

At Kerala Talks OOH 2015 held at Kochi recently, Chandramohanan, Patron, KAIA and Chairman of Venpakal Group highlighted how OOH has emerged as the preferred advertising media in Kerala. 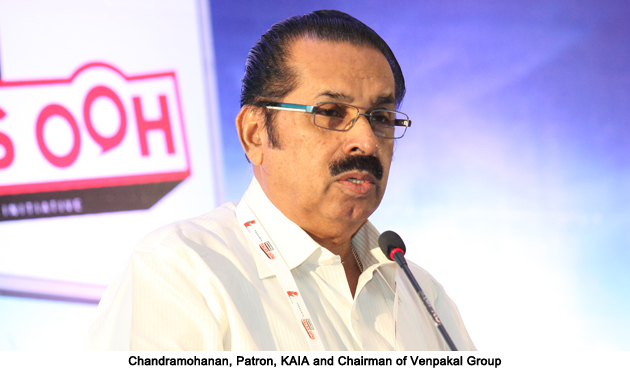 Known as a consumer market, brands are viewing Kerala as a test market with the state having less marketing expenses compared to other metro cities in India. At Kerala Talks OOH 2015 held at Kochi recently, Chandramohanan, Patron, KAIA and Chairman of Venpakal Group highlighted how OOH has emerged as the preferred advertising media in Kerala.

"Primarily we have to consider the geographic and employment situations in Kerala. There is a less chance to establish big industries like neighbouring states in Kerala. With this fact, we have to accept Kerala as a mega city with less industrial growth. To assess the differences with other advertising media, OOH is the cheapest medium to advertise. This is the major factor that has to be pointed while talking about the reasons that how OOH emerged as a preferred medium of advertising in Kerala,â€ said Chandramohanan.

Explaining about the association and how it played an instrumental role in the overall development of this industry, Chandramohanan said,"Kerala having a varied heritage and being the most literate state in India, unemployment is still a major problem faced by the society. Outdoor industry helps to control the level of unemployment upto an extent.â€

While discussing about the sustainability of OOH media industry in Kerala, he said that the present regulations by the government is tougher for the industry. "The authorities should revise the regulations and make it more flexible and dependable, which would help the industry to achieve its goal. This must be helpful for OOH to be a more preferable medium of advertising,â€ concluded Chandramohanan.