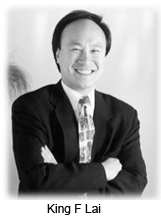 With over 30 years of successful advertising, marketing and management experience, King F Lai, Chief Executive Officer-Asia Pacific-Kinetic brings to you his expert opinion on the topic, "Growing Business for Specialist Agencies in Asia - Challenges & Opportunities " at the Outdoor Advertising Convention (OAC) 2013, which will be held on July 5-6, 2013 at Grand Hyatt in Goa.

Whether growing a business or maturing a talented staff, King's unbounded energy and wide-ranging professional experience has time and time again allowed him to set and exceed goals that others would deem unattainable. King's abilities to not only turn broad-minded, abstract concepts into executable ideas, but to also motivate the people working with him to excel, have made him a natural leader. His insights in matters ranging from consumer behavior to technology trends have gained him deserved respect from clients and peers alike.

In 1992, King joined Saatchi & Saatchi Taiwan as CEO and in two years moved the agency into the top 10 and was chosen by Advertising Age magazine as the first'Agency of the Year' in Taiwan. In 1996, he added the CEO responsibility of Saatchi & Saatchi Great Wall; building the largest advertising agency in China. He was also appointed Vice Chairman of Greater China.

In 2000, King took the helm as CEO at NetEase.com, one of the leading Internet portals in Mainland China. He and his management team successfully took the company public with a NASDAQ listing in June of that year.

King then joined Initiative Worldwide, a global media agency in January 2002 as President, Asia Pacific. Under King's leadership, Initiative expanded its Asia network from three offices to over 14 wholly owned and affiliated offices in the region; serving major local, multinational and global clients. King's career journey finally led him to where he is today.