MTV and What The Fish promote promote safe sex in three metro cities on the occasion of World Aids Day. 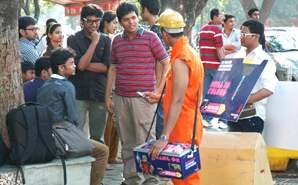 On the occasion of World Aids Day, Kamasutra MTV Hardwear Condoms in association with What The Fish movies spread the message of Safe sex in an unique manner. In sync with the theme of its upcoming rip roaring comedy - What The Fish, Viacom 18 Motion Pictures took the cast of the movie to the streets to promote Safe Sex amongst young adults in true MTV style.

The promoters distributed condoms in Mumbai, Bangalore and Delhi Colleges to spread the message of safe sex in lieu of World Aids Day. The campaign was an extension of some of the quirky and comic elements used in the film.

Subtle  in tone with the sexual innuendoes, the campaign revolves around the product name Hardwear. The promoters had placards with quirky messages and handed over free samples of the condoms to the audience. 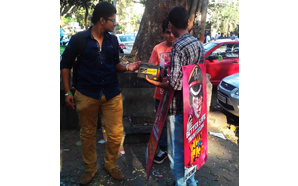 "What The Fish is one of the most refreshing comedy films you are going to see in a while, and the sheer craziness of the film demanded that we break past the clichÃ©'s and do something more young and exciting. Besides that, marrying the comic elements of the film and using that to support a larger cause of spreading awareness on AIDS was something we intended to do with this activity,â€ said Rudrarup Datta, Head of Marketing & Operations,
Viacom18 Motion Pictures.

Speaking about this, Sumeli Chatterjee, Head - Marketing & Insights, MTV India said "Witty, provocative, playful and young, we have designed a campaign for Hardwear Condoms that is packed with MTV's quirk. Unlike others, the Hardwear condom communication is funny, fresh and can be shared without inhibitions. In line with this youthful and edgy campaign, we partnered with What the Fish, the movie, to add a bit more quirk to the launch and spread awareness on AIDS. The message is : 'Stay Protected. Ask for Hardwear'.â€