The Social Street has executed the'Childsurance' campaign in 105 cities with more than 900 billboards across pan India in Phase 1. 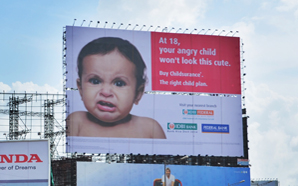 The Social Street recently launched IDBI Federal Life Insurance's outdoor campaign on child insurance across 105 Indian cities. Creatives comprising pictures of a grumpy baby with catchy messages promoted IDBI's product'Childsurance'. The angry baby photos attract your attention with a message that the child will not look this cute when he /she is angry at the age of 18. The humorous copy redirects the customers to systematically plan for the future needs of their little ones.

Explaining the objective of this campaign,  Aneesh Khanna, Chief Strategy and Marketing Officer, IDBI Federal Life Insurance, said, "According to a survey, about 60% of Indian parents are worried about the rising education costs. According to the National Crime Records Bureau statistics, an Indian dies in an accident every 90 seconds. With such uncertainty and rising costs, the biggest worry in the minds of today's young parents is whether they can meet the financial need of their children even during their absence. Our children's insurance solutions address these concerns effectively.â€ Khanna continued, "The message of angry babies is so strong and striking at the same time that we thought an outdoor campaign would effectively communicate the thought of the campaign. The best part about this campaign is that while it gives a gentle nudge to young parents to plan for their children's future needs, it does so by taking a complete departure from regular advertising featuring babies. While you would see happy baby faces in most advertising, ours features angry babies and this has caught the attention of the audience.â€ 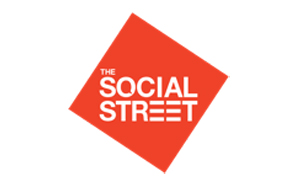 Pratap Bose Founding Partner and Chairman, The Social Street, said, "The Childsurance campaign from IDBI Federal is indeed an intriguing one, as the cute angry babies immediately draw your attention. Large scale formats in the OOH space, enables the imagery of the visual to be disproportionately large, so as to draw attention and drive home the point that your child's insurance is certainly not something that you can take for granted.''

The Social Street has executed the Childsurance campaign in 105 cities with more than 900 billboards across pan India in Phase 1. Nitin Rastogi, Associate Vice President, The Social Street informed, "We planned & shortlisted each and every media considering the creative even the way the baby looked towards the traffic as per the positioning of each site. We have tried to explore the exclusive form of advertising that outdoor offers effectively in this campaign. In Phase 1, we integrated the campaign with radio while in Phase 2, we are planning to take it a step further with on-ground activation and digital.â€

The company has also tied up with radio station BIG FM 92.7, for its radio efforts for the campaign. It will cover 11 cities that enjoy high radio listenership and affinity with the target group. Radio campaign will be divided in two phases - in the first phase, IDBI Federal Life Insurance will run a radio contest and in the next leg it will engage audiences with interesting ideas like radio films and counseling sessions. The company also has plans to have activations and digital engagement to promote the campaign further.