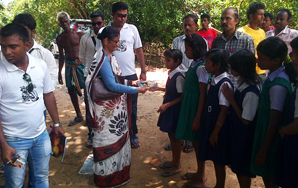 OAAWB (Outdoor Advertising Association of West Bengal) as a part of their social welfare programme on August 16th 2013, distributed books, exercise books, pencils, drawing books & colour pencils amongst 150 children's at "Pradima Ramprasad Primary School", Saripur- Digha, East Midnapur. The initiative has been taken among the primary classes of III, IV and V. Ashif Kumar Biswas, Treasurer and Convener Grievance Committee (OAAWB)â€“ shares, "We try to organize these kind of activities for at least two-three times in a year. This is the second time we have conducted such welfare programme and previously, such initiative was taken in the month of February 2013 in a primary school located at a remote village in Bankura District. Our next attempt would be to organize a blood donation camp in Kolkata as a part of our CSR plan.â€