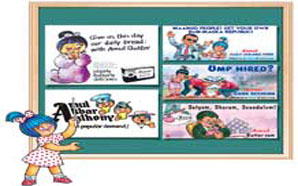 Amul Chocolates has been rated as the top performer brand in a study by Consumer Voice, a leading magazine published by VOICE (Voluntary organization in the interest of consumer education), in its March 2014 edition.

The tests have been conducted independently in government approved laboratories. A statement from the Gujarat Cooperative Milk Marketing Federation (GCMMF), which owns the Amul brand, also claimed that "Moreover, both Amul Milk chocolate and Amul Dark chocolate have been ranked No. 1 on value for money basis also.â€

Amul has been marketing chocolates since 1970's and it has come out with a range of premium chocolates and gift packs at attractive price points to delight its consumers. With a turnover of around Rs 18,000 crore, GCMMF is India's largest foods product marketing organisation. It procures an average of 15 million litres of milk from 3.5 million milk producers and sells a wide range of dairy products including butter, cheese, icecream, among other products.
Tags : Amul Chocolates VOICE Cadbury Bournville Gujarat Cooperative Milk Marketing Federation
Advertisement