The brand has tied up with Balaji Motion Pictures for the promo of 'Once Upon a Time in Mumbai Dobaara' focusing on the Gujarat and Maharashtra markets. 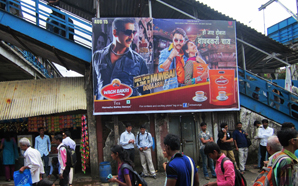 Through a strategic tie-up with one of the much awaited movies of Balaji Motion Pictures,'Once Upon a Time in Mumbai Dobaara', Wagh Bakri Tea Group has charted out an aggressive brand promotion campaign which has also leveraged the Outdoor media platform effectively. Parag Desai, Executive Director, Sales & Marketing - Wagh Bakri Tea Group, shares, "We had been approached by Balaji Telefilms to market the movie'Once Upon a Time in Mumbai Dobaara'. They were looking for a brand as'Kaddak' as the movie and'Wagh Bakri Tea' fit the bill. Also we are a strong player in Mumbai. The movie revolves around the relationships of characters and with our tagline'Hamesha Rishte Banaye - Building relationships', we resonated its gist. So the association made perfect sense. The campaign is designed to promote the movie and our brand at the same time. It would further help us to connect with masses in the metros, more so in Mumbai and Delhi.â€

Wagh Bakri has planned to go on with the campaign for the entire month of August not only through Outdoor but also with the help of other media options available. "We have already started OOH campaigns Pan-India with a major focus on states where we are strong,, like Gujarat and Maharashtra. We have strategically identified hoardings and other OOH platforms there. Apart from India, we have taken this campaign in counties like UK, USA, Australia, etc. through print, TV and Digital media,â€ further shares Parag Desai.

On associating with Wagh Bakri Tea brand, Tanuj Garg, CEO- Balaji Motion Pictures, said, "Our film contains "Strong (Kadak)" characters and star cast with a story based on "Relationship" hence we selected a brand, known over the world for its "Strong Taste (Kadak- Mithi)" and "Building Relationships (Rishte Banaye)" over a cup of tea i.e "Wagh Bakri Tea".