The biggest, at 57 square metres, is in the arrivals baggage hall at Stavanger's Sola airport. 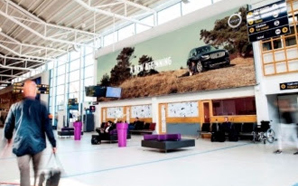 Clear Channel Norway and display maker Absen have worked together to deploy large advertising screens in three Norwegian airports, with the media owner saying it is now convinced that LED offers a high-performance alternative to LCD for applications of this kind.

"The Stavanger installation in particular was a wish from [Clear Channel, or CCN] to install a high-resolution, high-impact screen for the end user, in an attempt to satisfy and attract high-profile advertisers,â€ said Absen's European managing director Ruben Rengel.

"The 57-square-metre screen not only gives a great opportunity for advertisers to get their message across, it serves as a fantastic reference for CCN expertise in providing state-of-the-art digital signage solutions.â€

Clear Channel holds the digital signage contracts for seven airports across Norway, but until now has generally opted for LCD technology.
However, with the new LED displays, "image quality on the screen is undoubtedly one of the best we've seen in the worldâ€, said Jonas Michael, head of digital development and operations at the outdoor media owner.

"We have tested a lot of brands and we realised that Absen had one of the best-quality LED panels on the market at a price that is competitive, so the decision to deploy LED screens of various sizes for these airport projects was a no-brainer.â€

Absen also recently supplied the display technology for a video wall in the metro system of Oslo, the Norwegian capital.