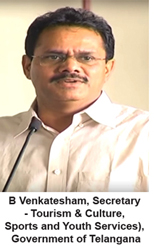 (TSTDC) has opted for a plane wrap to beckon more tourists among a wide cross-section of air travellers to the attractive tourist destinations in the state of Telangana. A.G Innovations partnered Telangana Tourism in planning and executing a highly impactful plane wrap-based campaign, wherein the creatives drew the high-flyers attention to attractive locations and sites like the Royal Falaknuma Palace, the majestic Golconda Fort, the beautiful 1000 Pillars Temple in Warangal, Mallela Theertham waterfall in Mahabubnagar, Pakhal Wildlife Sanctuary in Warangal among others.

This is by far the most innovative media chosen by Telangana Tourism, and indeed this is the first Indian tourism body to wrap an aircraft for a 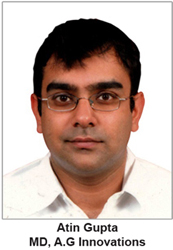 campaign. The 2-month campaign that is running on a SpiceJet aircraft features images of Chowmallah Palaca and Taj Falaknuma, displaying the grandeur on one side and the impressive architecture and design of Golconda Fort & Seven Tombs on the other side. The message states: “Visit for All Reason & All Seasons”.

B Venkatesham, Secretary -- Tourism & Culture, Sports and Youth Services), Government of Telangana, said during the unveiling: “Different tourisms from across the country have been promoting themselves for 50-60 years through advertising but none have taken this initiative of wrapping an aircraft. The youngest state is the first to take such an initiative. We want Telangana Tourism to fly high rather than walk or run and hence we have chosen to wrap the Aircraft so our brand is visible at 36,000ft above sea level.”

Atin Gupta, MD, A.G Innovations, said: “It has been an honour to be a part of the amazing campaign right from the concept to the design and execution. The SpiceJet aircraft will fly to all corners of India promoting awareness and spreading the message of Telangana Tourism. I would like to thank everyone at Telangana Tourism for giving us this wonderful opportunity.”